Demand for testing, inspection, and certification (TIC) has witnessed significant increase in parallel with high growth of industries such as oil & gas, automotive, aerospace, electrical & electronics, and food & agriculture. Increasing population and rapid urbanization will ensure significant opportunities for ongoing and upcoming industrial and commercial projects, which is aiding market expansion across regions.

In-house TIC is projected to remain most sought-after, especially across the industrial and oil, gas, and chemical sectors.

In its revised study, ESOMAR-certified market research and consulting firm Persistence Market Research offers insights about key factors fueling the demand for testing, inspection, and certification. The report tracks global sales of TIC in 20+ high-growth markets, along with analyzing the impact of COVID-19 across the world.

This edition (2021-2031) brings readers up-to-date with key market developments, providing analysis on how stakeholders are reacting to change. The study also expands on the previous competitive landscape section, and readers will get to know the key strategies of established players as well as new entrants.

What Does the Future Outlook Look Like for Testing, Inspection, and Certification in Comparison to Historic Patterns?

Invention of new technology as well as high demand for inspection and testing at regular intervals across several industries such as oil & gas and consumer & retail are expected to drive market growth, regardless of industrial seasonality.

The volume of international imports and exports is increasing, especially for products such as food and medicines. Food & beverage, consumer electronics, agriculture, and automotive (electric vehicles) industries are estimated to provide more opportunities for TIC services over the coming years.

However, trade wars and fluctuations in growth have posed challenges to end-user industries, and with the major outbreak of COVID 19, the testing, inspection, and certification industry is playing a critical role in providing assurance that the products and services provided, especially in the healthcare sector, meet necessary health requirements and fundamental safety.

Capital expenditure is set to increase further as TIC service providers take advantage of the potential of new technologies to transform the sector, often by forging partnerships with specialist providers. Rise of the middle class in emerging countries, growing demand for safety, and increasing infrastructure investments are aiding market expansion.

Increasing outsourcing and privatization will further boost demand for testing, inspection, and certification in the years to come.

According to Persistence Market Research’s analysis, the TIC market is anticipated to expand at over 5% CAGR from 2021 to 2031.

What is the Commercial Potential of TIC?

Testing, inspection, and certification firms cover a wide variety of industry sectors as well as a large array of standards and legislation. As a result, independent TIC service providers play a critical role in almost every economic sector.

Oil, gas, and chemical industries account for more than 15% of testing, inspection, and certification services. In addition, SMEs' awareness of the quality and safety of chemicals used in various manufacturing operations is boosting market revenue.

How are Partnerships & Acquisitions Providing Stimulus to Testing, Inspection, and Certification Service Providers?

Key industry players are exploring partnerships and acquisitions of startups offering innovative products in order to extend their market scope. They are actively engaged in various forms of partnerships, and are partnering with infrastructure developers, service providers, simulation services, governments, public associations.

These partnerships are creating new avenues for product development, market positioning, improving service value, as well as easy deployment into the market. The TIC market is fragmented in nature, due to which, market players are able to augment financial performance with strategic acquisitions, and the opportunity for returns on investment remains high.

Rising demand for safety and comfort has prepared the path for major developments as well as research & development from original equipment manufacturers and automobile dealers for the testing of electronics parts and compliance with government regulations.

Leading players are introducing a range of initiatives in a bid to enhance productivity and customer experience. Rather than developing proprietary software, they often pursue strategic partnerships with specialist technology providers. 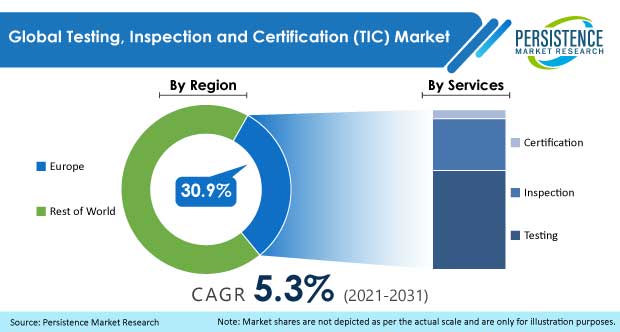 Why is China Racing Ahead in Testing, Inspection, and Certification Services?

China has projected to gain more than 1/3 market share over the forecast period 2021 to 2021. Rising foreign investments are projected to boost the market for testing, inspection, and certification in China. To gain progressive liberalization, the Chinese government has enacted policies that make it easier for foreign players to develop a presence in the region.

Multinational TIC operators are set to expand further into developing economies, chiefly through new acquisitions, with China being the prime target. Furthermore, advancement and adoption of alternative fuel vehicles such as hybrid and electric vehicles are expected to increase testing and inspection activities for such vehicles, driving market growth in China over the forecast period.

A large number of companies in the Asia Pacific region are planning to acquire other firms in order to extend their footprints across regions. There are currently three Asian headquartered players in the top 50, which include CTI and CAERI in China and KGS in South Korea.

Which End-use Industry in the U.S. is Driving Demand for TIC?

The market in the U.S. is expected to grow through industrial variability due to growing demand for inspection and testing processes at regular intervals across industries such as oil & gas. Many improvements in certification requirements and development projects have been announced by the U.S. government, which will enhance demand for TIC in the country.

Also, widespread mining activities are being carried out in the country, which is leading to high growth of TIC service providers in the United States.

Why Does Germany Holds Maximum Potential in Europe for TIC Services?

In Germany, introduction of stringent environmental standards and increased health safety initiatives play an important role in ensuring that facilities, utilities, and products meet the necessary standards and regulations. Germany has a robust foothold of players such as TUV SUD Group and DEKRA Certification, contributing to positive market growth.

Germany is the leading economy in Europe, contributing to almost a quarter of the EU's GDP. The testing, inspection, and certification market in Germany is moderately fragmented, with a number of significant players. In terms of market share, the country's prominent players such as TÜV SÜD Limited dominate the market.

Why will Demand for In-house Sourcing Continue to Rise in Brazil?

Brazil sees high demand for testing, inspection, and certification from the industrial sector. Brazil is one of the largest service providers in the Latin American region for in-house testing, inspection, and certification. Goods and services provided in Brazil use technology developed in accordance with the Specific Profitable Method, which is leading to high demand for TIC services in the country.

How Much Scope Does South Africa Have for TIC Services?

In South Africa, the medical and life science sector is expected to drive demand for testing, inspection, and certification services. Implementation of new regulations in sectors such as mining, agriculture, and the automotive industry is fueling demand for TIC services in the country.

Advent of new technologies, increasing health safety measures, and stringent environment norms have changed the outlook for the compliance of standards and regulations in the country.

TIC services help in quality and safety analysis of materials, components, chemicals, and electronic and consumer products. Need for testing services to ensure effective interoperability of connected devices as well as networks has led to increased demand for TIC services. There is rising adoption of automation across numerous industries, which is increasing demand for test automation services, in turn, bolstering the market for testing, inspection, and certification services.

Which End-use Industry has Huge Potential for Testing, Inspection, and Certification Services?

Food & agriculture, industrial, and oil & gas sectors will show huge potential for TIC services over the coming years. Also, the oil, gas and chemicals end-use sector is a high-potential end user for TIC services. Agriculture and food industries are built on the principles of integrity, safety, and sustainability, and close monitoring of each principle is highly important.

TIC services for the agriculture industry are required to ensure quality and improve the productivity of food products. These services also support companies playing a crucial role in trading agricultural commodities and food products in acquiring international certifications.

According to Persistence Market Research, demand for testing, inspection, and certification will be higher from the industrial sector across geographies. Moreover, new research & development in TIC will provide lucrative opportunities for manufacturers in the industrial and oil, gas, and chemicals end-use sectors.

These new developments will enhance growth in industrial applications and help in enhancing the compatibility of TIC companies with future appraisal and development, thereby propelling demand for TIC services over the forecast period.

Food safety and quality are of the greatest importance to everyone involved in the production and distribution of food products and services. Hence, there are increasing international standards and regulations that need to be adhered to throughout the entire process.

Introduction of new food safety standards is providing new opportunities for TIC service providers. Steady digitization of goods and services is highly significant for TIC players, because not only does this affect existing TIC processes and services, but it also opens up new market opportunities.

The TIC market is significantly fragmented in nature, owing to the presence of a large number of service providers across the globe. SGS, Bureau Veritas, and Intertek, the top three players, have a total market share of less than 25%. Less than 40% of the market is controlled by the top ten participants.

The three top operators listed above have rapidly spread into new geographies and sectors over the last decade, transforming into diversified global majors. Second-tier companies have also gathered scale and international presence while remaining more sector-focused. Through these developments, companies are aiming at gaining a competitive advantage.

Between 2018 and 2026, the forecast period considered in the scope of study, the aftermarket sales of professional portable battery will grow at a stellar CAGR of 10.1 percent, reaching a revenue of US$ 6.9 Billion..

Rotating Equipment Repair Market report estimates the market to expand at nearly 5% CAGR over the period of 2021 to 2031..