SVF therapies have huge potential in regenerative medicine, and a significant number of clinical trials are being conducted across the globe to evaluate the significance of SVF isolation and processing techniques for different indications. These clinical trials use proprietary SVF isolation, aspiration, and transfer devices, thus, significantly boosting the growth of the stromal vascular fraction market. Most of these trials are being conducted in the matured market of the U.S.  For instance, in 2019, Healeon Medical Inc. evaluated Centricyte 1000, a closed system digestion of stromal vascular fraction, for use in frailty and aging processes to improve quality of life and functional health. Orthopedic and neurological applications are found to be most attractive in the field of stromal vascular fraction or adipose-derived stem cell therapy.

Non-enzymatic isolation methods utilize physical forces to separate cells from adipose matrix. Mechanical segregation strategies are alternatives to circumvent safety issues posed by enzymatic protocols. Non-enzymatic protocols have been endeavored comprising of precisely separating SVF using different devices or an automated closed system, resulting in ready-to-use SVF. To overcome concerns such as high cost, long protocol duration, and regulatory scrutiny, the adoption of non-enzymatic alternatives is increasing for improved volume retention of fat grafts. In addition, simplification of the technique with improved standardization along with reducing operator-dependent variations makes the non-enzymatic isolation technique more approachable in a clinical practice, and significantly aids the growth of the stromal vascular fraction market. 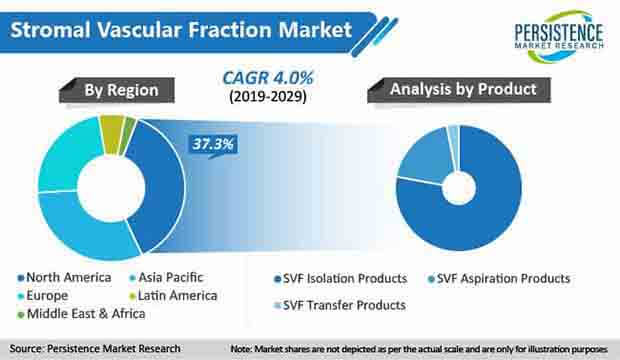 North America holds a noteworthy share in the stromal vascular fraction market, with 37% of total revenue, and is expected to exhibit a CAGR of around 4% during the forecast period. Growing incidence of skeletal muscular disorders such as osteoarthritis, increasing awareness about stem cell therapy, increasing volume of cosmetic surgeries, and rising demand among clinicians are factors expected to contribute to the dominance of North America in the global stromal vascular fraction market. Owing to increase in research & development activities in the development of innovative technologies and increasing preference for SVF as an alternative option for better clinical solutions have represented a continuous rise in the demand for advanced technologies, and expansion of private hospitals in rural areas are boosting the demand for stromal vascular fraction in Asia Pacific, which represents the second-most attractive market; it is expected to grow at a CAGR of 4.5% over the forecast period. Europe is projected to be the third-most lucrative region in the global stromal vascular fraction market, and is expected to exhibit a CAGR of 3.5% during the forecast period.

The market is characterized as a fragmented space, with a few key players operating across the globe, such as Cytori Therapeutics Inc., Cellular Biomedicine Group, and others. Investment in R&D to launch new product lines is a key strategy being adopted by manufacturers in the stromal vascular fraction market. LipoCell from Tissyou, is a promising class IIa medical device that exploits an innovative technology to allow harvesting, which is effective in optimizing fat tissue recuperation for subsequent autologous infusion.

Key indicators of market growth, which include Year-on-Year (Y-o-Y) growth of the market and compound annual growth rate (CAGR) are explained in PMR’s study in a comprehensive manner. Other information includes definition, drivers and opportunity analysis by region, which helps in deep understanding of the market segment with details about researchers, suppliers, manufactures, and distributors. This information can help readers understand the quantitative growth prospects of the stromal vascular fraction market for the forecast period.

The study is relevant for manufacturers, physicians, suppliers, distributors, and investors, and can help them in developing appropriate strategies to grow in the market. Business researcher, shareholders, industry experts can leverage the information and data presented in PMR’s study.

The study also includes statistics as well as facts related to macroeconomics factors that are impacting developments in the market. It also offers actionable insights based on the future trends in the stromal vascular fraction market. Furthermore, small businesses and new entrants in the stromal vascular fraction market too can make use of the information presented in this study, based on which, they can make appropriate business decisions in order to gain momentum in the market.

Comprehensive information acquired from primary resources and secondary resources acts as a validation from companies in SVF isolation devices, and makes PMR’s projection on the growth prospects of the stromal vascular fraction market more accurate and reliable.