Servo motors & drives have emerged as one of the most advanced motion control devices over the years, as they incorporate precise dimensional tolerance, advanced design methods, and high-force magnet materials. With an increasing number of industries shifting their focus towards maintaining a high level of precision, reduced labor costs and production wastages, and improved production output, the deployment of servo motors & drives continue to pick pace. 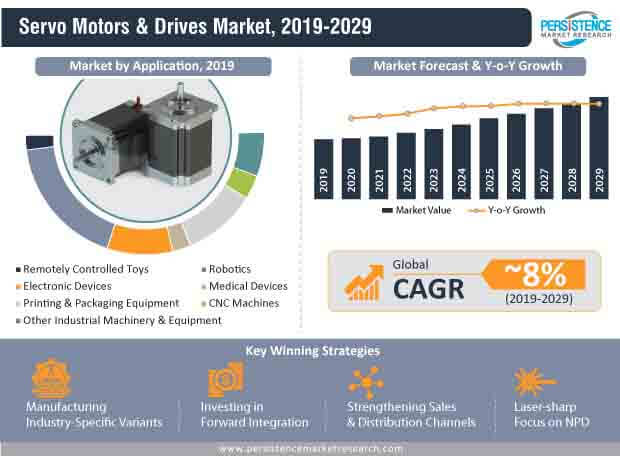 The servo motors & drives market tracks back to 1800’s when the first working rotating electric motor was introduced in May 1834 by Moritz Jacobi. Over the years, the motors have transformed completely, from conventional ones to high-tech modern variants. Starting from DC motors, the technology roadmap witnessed AC motors and steeper motors before the advent of servo motors, which continue to revolutionize the industrial operations considerably. With an increased number of industries leveraging advanced technology and inclining towards automation, the demand for servo motors & drives have grown considerably in recent years.

As per the PMR analysis, the sales of servo motors & drives reached US$ 12,177.3 MN in 2018, and are envisaged to grow by ~6% in 2019. Versatile profile of servo motors & drives with low maintenance and impressive durability is increasingly compelling manufacturers to look forward to servomotors as an integrated part of their facility, which in turn, is highly likely to fuel the market growth.

Industry 4.0 Paving the Way for Deployment of Servo Motors & Drives

Automation in industrial processes has resulted into high production, low cost, more precision, and reduced man-power requirement in the recent years. For that matter, the automation industry continues to grow by leaps and bounds, thereby creating extensive applications for advanced instruments and machines. Rapidly growing trend of industry 4.0 has created a stream of opportunities for market players, with large number of industries continuing to replace conventional motors with servo motors & drives to streamline operations and enhance overall production. Numerous industries have shifted to servo motors & drives to conduct precise operations led by the input signals. This falls in line with the fact that as multicore servo motors & drives promise higher precision, give better feedback, and provide greater control, they have emerged as a key foundation for Industry 4.0.

With a growing number of manufacturing industries placing their focus on leveraging advanced technology and embracing automation, the demand for industrial robots continues to remain unprecedented. Growing use of industrial robots in extensive range of assembly, pick-up, and manufacturing applications across automotive, electrical/electronics, automotive, metal, and other machining industries, continues to fuel deployment of servo motors & drives across various verticals. Adoption of servo motors & drives for robotics applications has grown in recent years, and attributed to sales worth ~US$ 5,712 Mn in 2018. This is envisaged to grow further in the years to come, as conventional motors continue to lose their grip, and are increasing getting replaced by faster, more efficient and durable variants.

East Asia to Outpace Europe through 2029

Gains continue to remain concentrated Europe for servo motors & drives’ manufacturers, owing to the healthy presence of end-use industries, such as automotive manufacturing plants, and food & beverages. However, the table is likely to turn for European servo motors & drives market in the forthcoming years, with East Asia anticipated to surpass the region by the latter half of the forecast period. With growing manufacturing industries in East Asia, PMR estimates the market to grow at ~10% CAGR in the region during the foreseeable period.

Though wide applications of servo motors & drives have been increasing their adoption across various verticals, the small scale companies continue to utilize conventional motors owing to their comparatively lower costs. Low cost stepped motors continue to maintain their standpoint across small scale companies that often face budget crunch. Easy availability of various cheap substitutes, including serviced motors are also narrowing down the growth path of stakeholders.

Several players in the servo motors & drives market have placed their focus on manufacturing products that are designed to cater to application specific requisites in a more enhanced way to secure considerable increment sales. For instance, in view of the growing traction from meat processing industry, numerous manufacturers have launched steel servomotors with exceptional anti-corrosive properties. Stakeholders are witnessing an increased demand for anti-corrosive servomotors, as these variants not only showcase feasibility but also aid to maintain proper hygiene in medical and food & beverages verticals. For instance, in April 2019, Altra Industrial Motion Corp. launched stainless steel servomotors, which are ideal for meat processing equipment as it utilizes hygienic material.

With the growing competition in the servo motors & drives market, an increasing number of market players are collaborating and making deals with end-use companies to secure the sales of servo motors. This falls in line with their growing focus on not only attaining an edge in competition but to obtain the liberty to customize products as per their client’s demand. Furthermore, market frontrunners are also collaborating with end-use industries for setting up and installing servo systems. Such long-term contracts with end-users continue to promise stability in the revenue generation of companies and are creating opportunities for growth.

Growing number of manufacturers in servo motors & drives market have shifted their focus on providing hassle-free door delivery to customers. For instance, in 2019, Siemens AG launched a new programs to provide its customers reliable, door to door and promising delivery worldwide. Stakeholders are solidifying their sales channel to expand customer reach and make it easy for customers to purchase products. Additionally, in March 2019, Siemens AG also announced its plans to acquire KACO New Energy, which is a leading electronics manufacturer in the U.S. to fortify its position in the global market.

As the servo motors & drives market continues to pick pace in terms of competition, market players are increasingly working on new product development with a sharp focus on overcoming the shortcomings of the precursors. For instance, in May 2019, Parker Hannifin launched PSD servo drives that provides enhanced safety and reliability to the customer. In April 2017, Panasonic Corporation launched its new and improved servomotor segment of Minas A6 family to cater to the growing customer demand. In November 2018, Altra Industrial Motion Corp. introduced a new dual axis servo drive, which covered substantial shortcomings of the existing drives in the market.

The global servo motors & drives market is moderately fragmented due to the presence of adequate players across the globe. The top three players in the servo motors & drives market- Panasonic Corporation, Nidec Motor Corporation, and Nidec Motor Corporation accounted for more than half of the market share in 2018, and continue to remain the trailblazer with their unique product, channel, development, and go-to market strategies. 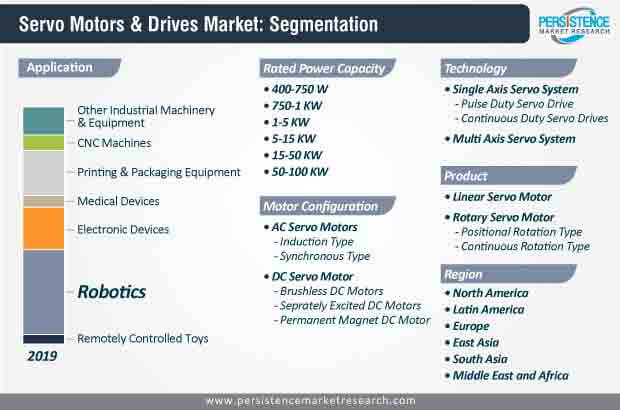 Servo motor is an electrical device that rotates an object or system such as a robot’s arm with prodigious precision and are most commonly used for high technology devices in industrial applications such as automation technology. It is a self-contained electrical device, which rotates the parts of the machine with significant efficiency and high precision. Moreover, the output shaft of this motor can be moved to a particular angle. A servo motor has four major components such as combine motor, feedback circuit, controller, and an electronic circuit. Due to the attached feedback system, these motors work in a close loop system.

Servo drives can also be called an amplifier since, it takes the control signal from controller and amplifies it to deliver a specific amount of voltage and current to the motor.

Several manufacturers are nowadays striving to come up with industry specific solutions to provide better and efficient products and meet the increasing requirement of customers in the market. The adoption of servo motors and drives is heavily increasing due to the several advantages of servo motors and drives. For instance, to attract customers from the meat processing and cutting industry, many companies are manufacturing stainless steel servo motors, which could serve its customers.

In the global servo motors and drives market, the robotics segment could possibly attract a notable traction in the global market of servo motors and drives owing to significant growth in the robotics industry as well as developments in the conventional manufacturing. The fact that companies from every industry are keen towards the production of products with more precision to match the exact desired dimensions, which can only be achieved by implementing the automation process in the industry with least human interference to reduce any possibility of human error.

Europe Projected to Register Significant Potential in the Global Market

In the global servo motors and drives market, Europe, East Asia, and South Asia regions collectively account for addressable share owing to the significant presence of end-use industries. The East Asia region emerge as a noteworthy region to grow with considerable CAGR over the stipulated time period.

Moreover, in these regions, factory or plant’s owners are replacing conventional motor systems with servo motors and drives to improve the productivity and on-time production. North America and Middle East & Africa regions are estimated to create adequate market opportunities over the upcoming decades owing to the significantly increasing number of assemblies or manufacturing plants in these regions.

The global servo motors and drives market is moderately fragmented due to the presence of significant companies in the market. Moreover, tier 3 players account minimal share in the global servo motors & drives market. According to the global in-depth study, there are many global companies active in the market with sales across different regions of the world.

The latest research study performed by Persistence Market Research (PMR) evaluates the historical and the present scenario of the ‘Global Servo Motors & Drives Market’ to accurately gauge the future opportunistic development of the market. The report includes detailed information pertaining to the vital growth factors, trends, and restraints that are influencing the growth dynamics of the servo motors & drives market to find out the lucrativeness of this industry. The study also presents information about how the servo motors & drives market will gain momentum during the period 2019-2029.

The report also includes a detailed taxonomy of the servo motors & drives market and riveting insights related to the market structure. The study covers company profiles of the notable market players that continue to lead the market growth with their unique strategies and approaches. A wide range of development and unique strategies being leverage by the established players and the market entrants have been mentioned in a comprehensive manner.

PMR’s report on servo motors & drives market can be bifurcated on the basis of technology, application, motor configuration, rated power capacity, product and region. The study offers information about the rapidly shifting market trends and dynamics related to the different market segments, and how they are influencing the development prospects of the servo motors & drives market.

What are the Salient Questions Answered in PMR’s Research Study on Servo Motors & Drives Market?

The research methodology adopted by the PMR analysts is based on a comprehensive primary as well as secondary research. By gauging the market-related trends, determinants, and information obtained by relevant sources, analysts have mentioned riveting insights and accurate forecast of the servo motors & drives market.

While performing primary research, PMR analysts conducted interviews with the leading market players to collect pertinent information about how the servo motors and drives market has changed over the years, and how they are coping with it. As a part of the secondary research phase, the analysts gauged company annual reports_bk_01_01_2020 as well as investor presentations. They also collected relevant information from the websites and the media releases of the leading companies operating in the servo motors & drives market. The analysts also assessed articles/reports_bk_01_01_2020 carried by validated sources of information to attain a better understanding of the servo motors & drives market.