Subjective tinnitus indication is expected to account for a market value of US$ 3.1 Bn by 2031. Overall, ringing ears treatment product sales accounted for approximately 25.3% revenue share of the global audiology market, which was valued at around US$ 9 Bn in 2020.

Sales of ringing ears treatment systems increased at a CAGR of approximately 2.4% from 2016 to 2020.

This has revealed that the prevalence of hearing loss is increasing at a rapid rate. As a result, patient preferences have shifted away from old and conventional treatments and toward more complex and advanced treatments.

Hearing aids are considered to be the primary treatment option for ringing ears. Hearing aids used for ringing ears therapy allow patients with hearing loss to listen to sounds they might be missing, which can effectively remove and cover the focus from the ringing sounds.

Manufacturers are actively focusing on adopting collaboration and expansion policies, which is expected to increase the sales of tinnitus masking devices. 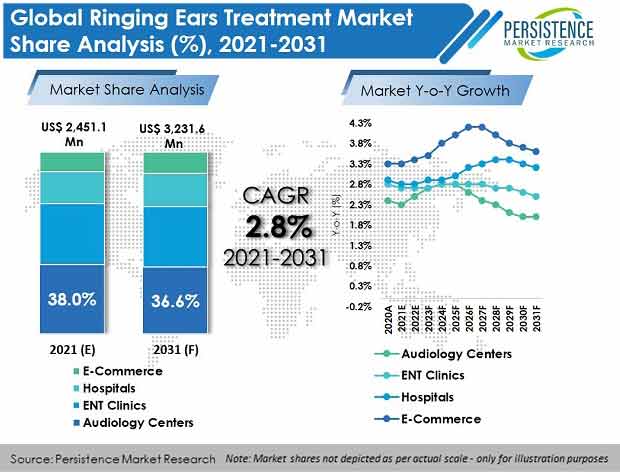 The coming years are set to provide many lucrative opportunities for manufacturers of ringing ears treatment devices around the world. Cases of hearing dysfunction are higher in Asia Pacific, Sub Saharan Africa, and South Asia. Several studies have shown that tinnitus confers a significant socio-economic impact.

It is estimated that a high number of elder age people reside in the above-mentioned regions and are prone to hearing disabilities. Current methods for ringing ear management include cognitive behaviour therapy and pharmaceuticals drugs; however, cognitive therapy is only effective in managing distress associated with the disorder rather than curing the disorder per se.

As the global geriatric population is on the rise, patients are preferring pharmaceutical/ drug treatment since these come with many advantages and offer rapid results as compared to behavioural therapies. This factor is important, as key players in the market can get associated with pharma giants in order to manufacture drug therapy products, and, in turn, boost their market growth.

Countries such as India and China have a high population that is suffering from hearing impairment issues. Young adults and middle-aged people are the population who suffer from this disability the most. As such a large fraction of the population is affected, adoption of treatment methods is expected to be very high.

Moreover, with a boom in technology and innovative advancements in digital and AI integrated software, market growth in these regions is likely to gradually rise during the forecast period.

Why is Demand Growth of Ringing Ears Treatment Being Affected?

Hearing-impaired people receive financial help from governments in a majority of countries across the world. Over the projected period, the low reimbursement scenario for hearing aids is expected to stifle the growth of the tinnitus management market.

The Irish Republic, for example, has a voucher system that covers half of the cost of hearing aids. But the lack of entirely public-funded reimbursement policies, just like in most other countries, may limit demand for ringing ears treatment equipment.

Despite some of the benefits of pharmacological therapy in the treatment of ringing ears, several of these medicines have the potential to cause tinnitus. These include both, over-the-counter and prescription medications.

Diuretics, antibiotics, blood pressure meds, chemotherapeutic drugs, pain relievers, and other pharmaceuticals are among them. This could be a crucial issue in limiting the usage of certain types of medicines for the treatment of ringing in the ears.

Why is the U.S. Ringing Ears Treatment Market Proliferating?

The U.S. is projected to account for around 96.5% share in the North America ringing ears treatment market in 2021.

High occurrence and rise in the incidence of tinnitus, rapid surge in the geriatric population, and high per capita healthcare spending in the country are primary factors that are anticipated to drive the market in the U.S. over the forecast period.

In addition, the government in the country is taking initiatives to standardize tinnitus treatment outcomes.

Will the U.K. Be a Lucrative Market for Ringing Ears Treatment Solution Providers?

The U.K. is expected to hold around 31.5% share of the Europe ringing ears treatment market in 2021, owing to enhanced digitization of healthcare processes and a rise in favourable government policies.

The market for smart tinnitus devices is booming in the United Kingdom, thanks to an increase in tinnitus patients and rising awareness. Many significant players in the European region are investing heavily in R&D in order to develop the best hearing aids/devices for persons with hearing loss, as well as working and partnering with other market players to expand their global footprint.

Will China Emerge as a Prominent Market for Ringing Ears Treatment?

China is set to project a CAGR growth value of 3.8% in the East Asia ringing ears treatment market due to rising geriatric population.

China has one of the fastest-growing ageing populations in the world. With this, there has been an increase in hearing impairment incidence, which is increasing the treatment-seeking rate in the country.

Demand for ringing ears treatment is further expected to grow with an increasing number of hospitals and audiology centers adopting e-health solutions over the coming years.

Ringing ears treatment devices are estimated to hold around 93.8% market value share, by product, in 2021. The use of medical devices for the treatment of tinnitus improves patient communication by reducing the irritating sensation of voices and sounds instigated by tinnitus.

Owing to this increasing incidence of subjective tinnitus, this indication is gaining the most traction in ringing ears treatment.

Companies involved in the treatment of ringing ears are actively attempting to strengthen their positions through product approvals, partnerships, mergers, acquisitions, and partnership agreements with both, existing and new market participants.

Manufacturers’ goal to acquire major share within the industry space is accelerated by product launches and acquisitions.

Some of the recent instances include,

What is the global ringing ears treatment market size?

The global ringing ears treatment market was valued at US$ 2.4 Bn in 2020.

What is the sales forecast for ringing ears treatment devices and drugs through 2031?

Sales of ringing ears treatment solutions are set to witness a growth rate of 2.8% CAGR and be valued at US$ 3.2 Bn by 2031.

What was the last 5 years’ market CAGR for ringing ears treatment?

Which countries account for the highest demand for ringing ears treatment?

What is the U.S. ringing ears treatment market outlook?

The U.S. accounted for around 96.6% share of the North American regional market in 2020.

Who are the top 3 manufacturers of ringing ears treatment products?

Prevalence of breast cancer is rising at an alarming rate, which is expected to fuel revenue growth of the global breast implants market over the forecast period..