The COVID-19 pandemic surged demand for recombinant cell culture supplements, owning to shifted focus toward COVID-19 research and stem cell research. Demand for these supplements increased during the pandemic. Supply chain crisis during lockdowns affected sales; however, sales resumed later on without adversely impacting the market.

What is the Future Demand Scenario for Recombinant Cell Culture Supplements?

Demand for recombinant cell culture supplements has been exponentially rising since the last few years. Moreover, increasing focus on stem cell research and oncology research has created a gateway for manufacturers of recombinant cell culture supplements. Recombinant products have advantages such as cost effectiveness in manufacturing and bulk production of supplements/growth factors. Recombinant DNA technology has revolutionized the pharmaceutical approach in developing therapeutics and research aiding products.

The recombinant cell culture supplements market is significantly expanding due to the development of novel therapeutics and biopharmaceuticals or biologics. Rapid growth of drug discovery programs is expected to boost demand during the forecast period. Demand for biologics and animal-free products is anticipated to transform the future of the biopharmaceutical industry.

All these factors are expected to create opportunities for the expansion of the recombinant cell culture supplements market size over the forecast period, which is projected to expand at a CAGR close to 7% through 2031.

What is the Impact of Market Consolidation Activities on Recombinant Cell Culture Supplement Demand?

Given the consolidation in the market, key players are focusing on strategic acquisitions. This trend is observed throughout North America, Europe, and Asia Pacific countries.

Why are Investments in Production Key to Market Growth?

Manufacturers are investing in the sector of cell culture media and its derivatives for production. Cell culture media is the most important ingredient in bio manufacturing and development & production of therapeutics. Cell culture supplements such as cytokine, growth factors, amino acids, vitamins, fatty acids, and lipid have been developed to support the growth of a wide range of cell lines.

Manufacturers are focusing on the expansion of production facilities to gain significant growth in the market.

Increasing investments and manufacturing capacity expansion are expected to favor the growth of the growth factors market over the forecast period.

How Does Emergence of Academia for Basic Research Impact Recombinant Cell Culture Supplements?

Academic research institutes have concentrated on advancing basic research, which also includes applied research. On the other side, government or industrial organizations prefer cost-effective ways to follow development programs. A majority of basic research continues to be carried out at academia, as companies focus on bringing products to the market with an eye on generating profits. According to the National Science Foundation’s 2012 report, 56% of basic research conducted in the U.S. is carried out in academia, whereas, 61% of all applied research and 87% of development happens in the industry.

Strong scientific and technological expertise available with academic research laboratories ensures that they continue to be the most reliable group to carry out basic research programs.

Regenerative medicine is a part of medicine that deals with the process to repair, replace, or regrow damaged and diseased cells, tissues, or whole organs that have been lost or disturbed due to congenital defects, aging, disease, or damage.

Recombinant cell culture supplements provide biochemical signs for stem cell separation, and are used to develop unique strategies to treat human diseases by inspecting cellular processes controlling development, aging, and tissue regeneration. Modulation of growth factors at the injury site is one of the strategies to stimulate tissue regeneration 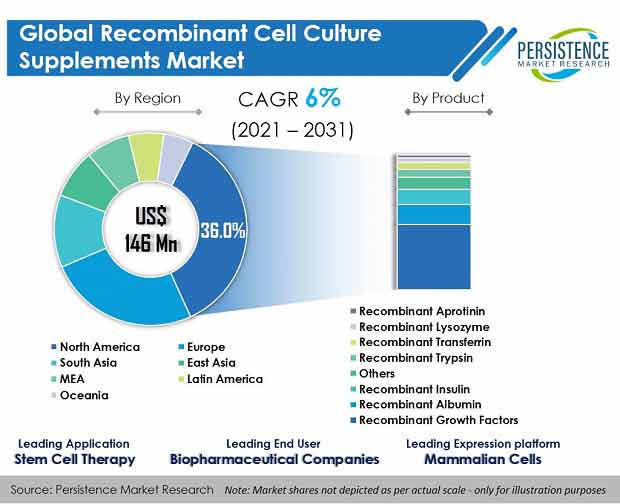 Mammalian cell culture techniques have been advancing over time. China can be said to be a leader in terms of adoption of technologies. Cell culture techniques such as cell-based assays have been extensively used in drug discovery. China is the hub for contract research activities in the world. Growing drug discovery and research activities in China play a vital role in increasing the adoption of recombinant cell culture supplements. China is one of the biggest biopharma industries in the world. In addition to this, China has a high number of domestic pharma companies. Moreover, the Chinese government provides financial support for ongoing life science research.

How will increasing oncological research and expanding therapeutic pipeline surge demand in the U.S.?

Premium institutes such as the National Cancer Institute (NCI) and others invest in major research initiatives to enable and support research on specific issues of importance to cancer research enterprises. The National Cancer Institute had earlier invested in initiatives such as Cancer Moonshot, The National Clinical Trials Network (NCTN), NCI Genomic Data Commons (GDC), the RAS Initiative, NCI Community Oncology Research Program (NCORP), etc. Growing research and development funding in the field of oncology is expected to drive the growth of the global growth factors market.

What is the impact of the growing contract research industry on India’s recombinant cell culture supplements market?

In recent years, small and large biopharmaceutical companies have become increasingly dependent on contract research organizations (CROs) and other clinical services to provide research services to their R&D operations. However, stem cell and growth factor-based products are expected to drive the market, as most products in the pipeline are likely to reach the end stage and be commercialized by the end of the decade.

In developing countries, it is easier to recruit patients for clinical trials. Clinical trial and research is now a major business in India, owing to numerous government-funded medical and pharmaceutical institutions with state-of the-art facilities, which can serve as ideal centers for multi-centered clinical trials. R&D costs in India are substantially less as compared to those in developed countries, and it is possible to conduct both, new drug discovery research and novel drug delivery system programs at competitive rates.

In terms of cost efficiency, India is better, as the cost to conduct a trial in the country is 50% to 75% less as compared to that in the U.S. or the European Union.

How the presence of recombinant cell culture supplement companies aiding the European Union?

Among the European countries, Germany is expected to be the leader in recombinant cell culture supplements, and is anticipated to witness significant growth over the forecast period. As per Persistence Market Research analysis, France will also progress substantially in this space. Presence of some prominent players such as Thermo Fisher Scientific Inc., Merck KGaA, Lonza, and Becton, Dickinson and Company in Europe will create remarkable returns for the region. Moreover, growing contract research manufacturing and research & development activities in the U.K. will also create high demand for recombinant cell culture supplements within the country. Companies and research institutes within Germany and the U.K. have an extensive pipeline in therapeutic areas such as cancer.

How is increasing demand for animal-free recombinant cell culture supplements impacting the industry?

With this, market players are also engaged in expanding their global and regional presence through acquisitions and expansion strategies.

Q1. Which is the most lucrative market for recombinant cell culture supplements?

The U.S., at present, holds the maximum market share and leads the global market for recombinant cell culture supplements. The U.S. is expected to experience significant demand for recombinant supplements over the entire forecast period.

Q2. Which application holds significant share in the market?

Q5. What are the challenges associated with recombinant cell culture supplements?

Challenges associated with recombinant cell culture supplements can be manufacturing of the proteins and storage. As these proteins are highly fragile to extreme conditions such as heat, their half-life is very important for research. Degraded proteins cannot be used for experiments in research and development. Other challenges include purity of proteins and lot-to-lot consistency of products. As these products are used for cell culture techniques, they need to be ultra-pure and safe for the cells to uptake them.

Worldwide fibromyalgia antidepressants market is projected to register a healthy CAGR of 8.1% during the forecast period (2021-2031)..

Our analysts combine an eclectic mix of experience, analytics, machine learning, and data science to develop research methodologies that result in a multi-dimensional analysis.