The adhesive and sealants industry, like other industries, is influenced by various social developments and global trends. While new innovative ways of building housing apartments and other commercial buildings come with the necessity of new materials to build with, aerospace community has been struggling to fight corrosion on metal airframes. Such high unmet needs across wide-range of industries have triggered rapid developments in adhesives sector in terms of resistance, enhanced sealing performance, and other specialized functionalities.

Many of today’s sealants were originally developed for general or specific applications; of particular interest is to determine how they add value to a number of industries. Persistence Market Research (PMR), in its new offerings, turns the spotlight on ‘polysulfide sealants market’ and provides important facts and figures determining the potential growth prospects of the market. 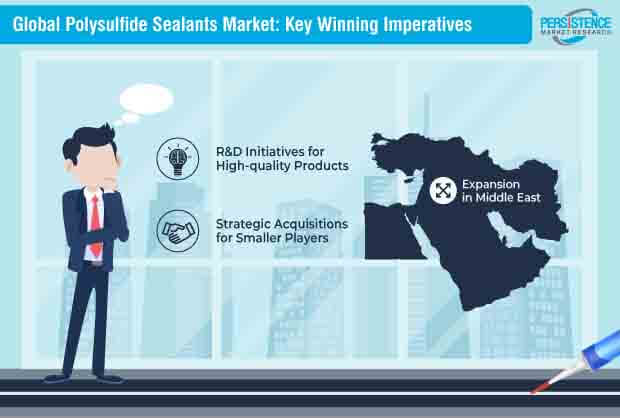 The first use of polysulfide sealants dates back to 1950s when synthetic polymeric adhesive began displacing many naturally occurring products for their greater adhesion and superior resistance to operating environments. With increased popularity of modern wall construction and high demand for sealing aircraft fuel tanks and offshore structures, the widespread use of polysulfide-based sealants grew rapidly over the years. In 2018, worldwide sales of polysulfide sealants recorded over US$ 1,000 million, and a large number of manufacturers continue to supply different products to various end users for multitude of applications. 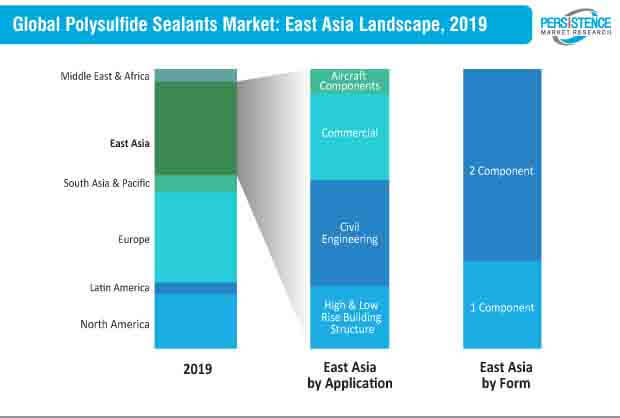 Considering the broader evolutions in number of end-use industries, polysulfide sealants manufacturers have also been forced to innovate. With continuous building and development of bridges, underpasses & tunnels, and roadways & culverts across the globe, the manufacturers are competing to develop high-quality products, especially for infrastructure and civil engineering projects.

As governments are keen to encourage innovations in the infrastructure and megaprojects are being proposed and progressed, polysulfide sealants market players are targeted towards leveraging opportunities created by evolving trends in civil engineering and the world’s infrastructure market. In addition, product innovations and development strategies are highly influenced by growing need for advanced sealants to fight against corrosion of aircraft components and prevent leaks arising from aircraft fuel tanks. Expansion of airports along with rising demand for aircrafts, especially in developing regions, to sustain the needs of ever-increasing number of air travelers have also led to realignment of these strategies.

Stakeholders’ Strategies to Win a Strong Position in the Market

As high cost and limitations to change chemical compositions continue to challenge the growth of polysulfide sealants market, key manufacturers are focused on innovations for the development of new products in association with chemical researchers and other stakeholders. In addition, they are making high investments in R&D activities to address any complications associated with adhesion of polysulfide sealants and other variants. Considering the nature of the product and its scope of application, polysulfide sealants market players are also directing their investments towards launching new products and diversifying their product portfolios for wide-range of applications.

Expansion and establishments of new production facilities in new markets, particularly Middle East & Africa (MEA), remain a key focus area of the polysulfide sealants market stakeholders. As competition for investments opportunities in developed markets rises, a number of leading market players are targeting developing regions for new opportunities along with better yields and margins. These players are not only viewing these regions from manufacturing perspectives but also from target market perspectives. For instance, Sika AG, a key polysulfide sealants market player, has invested in 51 new plants, 21 new national subsidiaries and 22 acquisitions since 2012, focusing on developing markets in MEA.

The polysulfide sealants market shows a fair level of consolidation, where local or country-level players account for significant share of the market. Top three global players including Sika AG, Henkel AG & Co. KGaA, and H.B. Fuller continue to maintain a strong presence in the market by promoting bulk procurement of products for large industrial applications.

Leading players of polysulfide sealants market are no stranger to acquisitions; many of the companies’ important strategies revolve around strengthening their presence in particular regions by acquiring small players in those regions. In addition, a number of manufacturers are entering into strategic partnership with industry-related companies to extend their reach across several industries. For example, in 2018, GCP Applied Technologies Inc. announced that it has acquired R.I.W Limited, a supplier of waterproofing products in around $30 million deal.

Key business strategies of polysulfide sealants market players include selling of products through several distribution channels in different regions across the globe, along with establishing long-term contracts with distributors, especially in developing countries. It is highly likely that leading players H.B Fuller and 3M will continue to strengthen their sales and distribution channels. 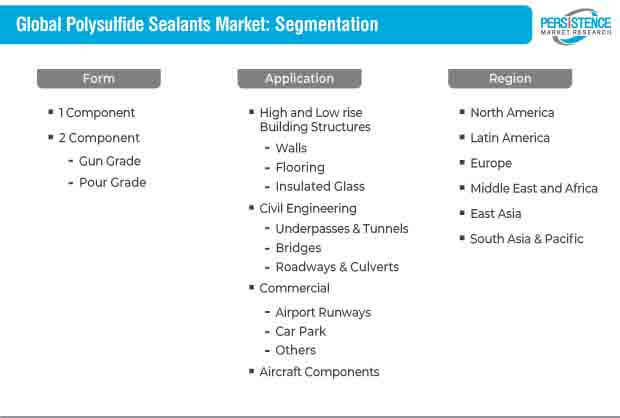 Report authors maintain a positive outlook of the polysulfide sealants market, which is projected to record a CAGR of over 3.5% during the period, 2019-2029. As continued urbanization and industrialization in developing countries such as China and India have led to rapid expansion of construction industry, polysulfide sealants manufacturers will need to capitalize on this sector. Polysulfide sealants contain negligible amount of solvents in its formulation, and are noted to showcase no VOC emissions throughout its service life; with increasing implementation of stringent regulations regarding VOC emissions, market players should be looking at a period of sustained demand.

Commercial and Civil Engineering Segments are expected to Expand, owing to Large-Scale Investments in the Construction Industry

Rising construction activities prominently in developing countries or regions such as Asia Pacific, Latin America, and Middle East & Africa are anticipated to boost the polysulfide sealants market. With several countries focusing on upscaling their residential as well as civic infrastructure, the sales of polysulfide sealants are also expected to remain influenced by the same. Based on applications, the commercial segment is expected to dominate the global polysulfide sealants market with a slight edge over the civil engineering segment. Whereas, in terms of the growth rate, the civil engineering segment is anticipated to expand with a high CAGR. The growing urbanization compels administrative authorities to provide better infrastructure facilities such as roads and bridges. The increasing buying power of end consumers and the rising affordability of automotive vehicles raises the alarm for the parking issue. This has further resulted in the construction of commercial car park infrastructures and created unlimited opportunities in the global polysulfide sealants market. The remaining application segments including aircraft components and building structures, are estimated to cumulatively generate a revenue opportunity worth over US$ 350 Mn, expanding with a significant growth rate throughout the forecast period.

The increasingly large scale investments, from both private as well as public funds, are expected to remain a prominent contributing factor in the regional polysulfide market growth. New opportunity areas are anticipated to open up for manufacturers of polysulfide sealants due to the construction of several airports in the western part of China. With new roads being laid out to ease traffic problems in urban areas, the civil engineering sector is anticipated to dominate in several regions. Prominence in the maintenance and repair applications is also noted to remain a driving factor for the polysulfide sealants market up to a certain extent.

A recently study by Persistence Market Research (PMR) conducts a comprehensive analysis of historical and current scenario of the ‘Global Polysulfide Sealants’, to determine potential future developments of the market. The study provide in-depth insights on how the growth avenues of polysulfide sealants market will unfold during the period, 2019-2029.

In the report, readers can find various drivers, trends, and opportunities prevailing in the polysulfide sealants market, along with key challenges faced by market players. PMR’s study also covers a key indicator assessment to define the growth prospects of polysulfide sealants market, along with forecast figures of the market in terms of value (US$ million) and volume (tons).

The study focuses on key changes in the development of polysulfide sealants market during the forecast period. It also provides all-inclusive information regarding the performance of the market across different geographical regions. In addition, readers can avail a detailed taxonomy along with a thorough analysis of the competitive landscape, wherein, product development and strategic initiatives of polysulfide sealants market players have been included.

What are the Key Question Answered in the Polysulfide Sealants Market Report?

The report on polysulfide sealants market is a result of a detailed and extensive research methodology, which involved various primary and secondary resources. With the help the industry-validated information gathered through and verified by these resources, analysts could come up with vital insights on current and future development of the polysulfide sealants market.