Global Market Study on Gynaecological Cancer Drugs: North America to Lead the Global Market in Terms of Revenue during 2017 - 2026

Gynaecological cancers are being diagnosed among women on a large scale and are also emerging as one of the leading causes of death in various regions. There are various drugs available in the market to treat different types of gynaecological cancer. However, advanced cancer therapies and new drugs are being introduced with the increasing number of drugs currently in clinical trial and approval process.

Antitumor Antibiotic to Gain Highest Traction as a Drug Class

Hospitals are likely to emerge as one of the largest end users of gynaecological cancer drugs between 2017 and 2026. Towards 2026 end, hospitals are projected to bring in close to US$ 16,400 million revenue. Availability of advanced cancer treatment diagnosis at hospitals are resulting in increasing number of patients. Moreover, increasing investment by government and the private sector in hospitals and presence of specialist surgeons is also resulting in increased number of patients, thereby leading to the increased use of gynaecological cancer drugs. 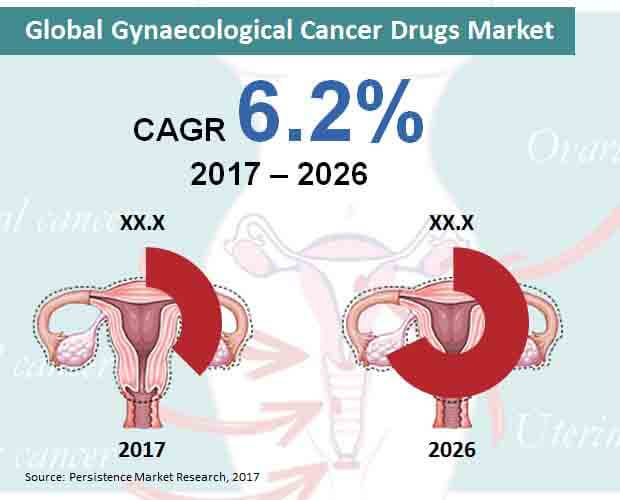 Hospital Pharmacies to be the Largest Distribution Channel

North America is projected to emerge as the major revenue generating market owing to the high prevalence of gynaecological cancer. By 2026 end, North America is projected to surpass US$ 14,700 million revenue. Meanwhile, Europe followed by Asia Pacific Excluding Japan (APEJ) are also likely to witness substantial growth in the coming years. Ongoing research and development and clinical trials of drugs in the U.S. are driving the market growth in the region.

The surge of innovation in gynaecological cancer treatments is attracting all the major participants in the market for cancer drugs. Scientific advances are leading to the new treatment options in the market. Hence, the gynaecological cancer drugs market is also expected to see a significant growth in the coming years. However, in the diversified regulatory systems, the healthcare industry in most of the countries are still struggling to adapt and embrace new treatment options. Moreover, the absence of advanced diagnostic and treatment infrastructure and poor financing mechanisms especially in the developing countries is hampering the market growth.

Market attractiveness analysis sheds light on the investment opportunities in the market. A study also includes SWOT analysis and Porter’s five force analysis to get an idea of the overall market. The report also talks about latest developments and new technologies with the capacity to transform the market in the next few years.

The leading market players operating in the global gynaecological cancer drugs market are also offered in the report. In-depth information on long-term and short-term strategies along with company and financial overview and product portfolio are also included in the competition analysis. The report also focuses on regulations imposed on the gynaecological cancer drugs market.

On the basis of indication, the market segment includes cervical cancer, uterine cancer, ovarian & fallopian tube cancer, vulvar cancer, and vaginal cancer. Based on the distribution channel, the market is segmented into hospital pharmacies, retail pharmacies, and e-commerce.