Global Market Study on eVTOL Aircraft: Multirotor and Rotorcraft eVTOLs to Generate High Growth Opportunities in the Near Future

In the aircraft industry, several technology-driven developments have brought about advancements that have led to realization of concepts sooner than we expected. eVTOL aircraft is another such advancement in the industry, which can revolutionize aerial transportation in urban landscapes. In the past few years, there have been numerous configurations of eVTOLs prototyped and tested.

Compared to a VTOL (vertical take-off and landing) aircraft, an eVTOL, also called electric vertical take-off and landing aircraft, offers competitive benefits. These light commercial aircraft can take off and land vertically just like helicopters and fly forward like airplanes. They can be propelled by a battery or by a combination of battery and conventional engine. Current design variants are built to be operated by pilots, while autonomously controlled aircraft are also being developed. eVTOL aircraft are environment friendly, designed to fly at a lower altitude, generate no noise, and are seen as potential candidates for urban aerial mobility. Civil and commercial use will hold bulk of the market share, with demand high for multirotors and rotorcraft

In its new study, ESOMAR-certified market research and consulting firm Persistence Market Research offers insights about key factors driving demand for eVTOL aircraft. The report tracks the sales of eVTOL aircraft in high-growth markets, where North America, Asia Pacific, and Europe lead the way. It also analyzes the impact COVID-19 has had on the aircraft industry in general, and the eVTOL aircraft space in particular.

Several product reforms, patent filings, design developments, and testing have given rise to a number of eVTOL manufacturers, which has resulted in more than 250+ designs in the market today. Most investments have been focused on improving aircraft design, performance, and power output. Emphasis on passenger and operator safety has propelled the aircraft industry to create more variants for different customer demands. eVTOL aircrafts are likely to be seen used in passenger transport as well as cargo transport.

According to Persistence Market Research’s analysis, the eVTOL aircraft market is projected to expand at more than 21% CAGR from 2021 to 2031.

The impact of the COVID-19 pandemic has been unprecedented on a global scale. The consequences have been wide reaching, particularly for aviation. Globally, the aviation industry is thought to have lost more than US$ 84 billion in 2020. Arguably, the challenge for eVTOL companies is even harder. The industry is still in its formative stages. In view of the COVID-19 pandemic, there have been some observable signs of the market slowing down. Overseas market development, remote working trends, unavailability of raw materials, and dependency on outsourcing were some of the factors that hampered the market on a large scale.

An usher in the number of start-ups focusing on commercializing their eVTOL aircraft is a very common trend in the market. To deploy aircraft into commercial use, regulating bodies such as FAA-Federal Aviation Administration and EASA Europe have prescribed a few guidelines regarding aircraft airworthiness, noise standards, safety, pilot requirements, and several other criteria.

To get an aircraft certified also requires a hefty amount of investment, which cannot be borne by all. Thus, there has restraint in local manufacturing where industries cannot afford to develop aircraft out of failure to get them certified.

How are Partnerships Providing Stimulus to eVTOL Aircraft Manufacturers?

These partnerships are creating new avenues for product development, market positioning, improving product value, lifecycle, and easy deployment into the market. They are providing a stimulus for the demand for eVTOL aircraft.

All leading companies are investing in research & development activities to gain a competitive advantage. Product development strategies and product positioning are being adopted by suppliers to establish a market foothold. Manufacturers are partnering with technical service providers to gain technical expertise in this field. With companies around the world increasingly focusing on research initiatives, rapid expansion is on the cards. 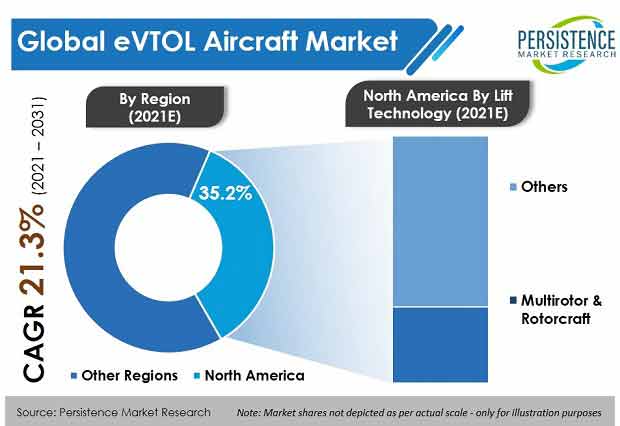 How big is the Opportunity in the U.S. for eVTOL Aircraft Stakeholders?

The U.S. is home to some prominent market players such as Joby Aviation, which is aggressively growing in the eVTOL aircraft space. The company has attracted more than US$ 500 Bn from global investors, and has certified its aircraft for airworthiness. Moreover, the country is a frontier in eVTOL certification with backing from the FAA, U.S. Army, and U.S. Government. The U.S. has the highest value share in the global market, and it is expected to dominate over the forecast period as well.

How is the eVTOL Aircraft Industry Developing in Japan?

In Japan, the industry outlook is more of deploying eVTOL aircraft as urban aerial mobility candidates. There is large activity in this sector, as eVTOL technology attracts global attention to develop the highly anticipated concept of a 'flying car' and eco-friendly mobility.

What is Market Potential for eVTOL Aircraft in Germany?

European countries such as Germany are attractive hotspots for eVTOL aircraft. Some of the luxury car manufacturers based in the country are revising their prototypes to develop flying cars, another name for eVTOLs. There are several vertiport building activities taking place across the country via partnerships with national airports.

The country is likely to generate profitable business during the forecast period. It has a very high market potential considering commercial end use.

What is the Potential in Australia for eVTOL Aircraft?

How Will Hybrid Technology Influence Demand for Fully-electric eVTOL Aircraft?

eVTOLs used for civil and commercial mobility have MTOW (Maximum Take-Off Weight) from 250 to 1000 kg. These are mostly fully electric-powered aircraft used for civil and commercial purposes. There are significant developments in aircraft having MTOW over 1000 kg, which operate under vectored thrust and are often both, piloted and hybrid. At a nascent stage, light aircraft are expected to dominate the global market.

Is there Room for Multicopters or Rotorcraft in eVTOL Aircraft?

In the current industry scenario, a large number of manufacturers are developing distributed electric propulsion-based products that push towards multicopter configuration. Added advantages such as lower cost of manufacturing, short distance travel, and affordable production at scale will be preferred by most manufacturers, since their prime focus currently is rapid commercialization. In the U.S., Europe, and China, multicopters are being built and used for both, cargo and passenger transport.

How Will Autonomous Aircraft Fare?

Currently, with the rise of artificial intelligence technologies, there is a surging trend towards autonomous vehicles. Autonomy has significant benefits, as a self-driving vehicle increases lane capacity, reduces the time to travel, comparatively emits lesser harmful emissions, and improves fuel economy. To realize the usage of autonomous vehicles in reality, it still challenging, because complete robot-controlled driving is a feat, and still needs to be achieved successfully. These obstacles, when related to eVTOL aircraft, become more questionable. Although a few key players are prototyping pilotless aircraft, the current trend of piloted eVTOL aircraft dominates the global market.

What are the New Frontiers in Civil & Commercial End Use?

eVTOL aircraft manufacturers are seeking applications in a number of end uses in the civil and commercial space. One of these end uses points towards Urban Aerial Mobility (UAM). UAM has scaled up transportation to the next dimension. With the rise in global population, which is set to become 8.5 billion by the next decade, urban aerial mobility will improve the value of airspace above cities, decongest road networks, provide better commute time, and offer faster and emission-free transportation. eVTOL aircraft are referred as a high potential candidate for urban aerial mobility, as these will provide air taxi services and passenger services for 2 to 5 passengers at a time. It is expected that eVTOLs will reshape civil transportation in the near future.

Being one of the latest emerging technologies, the eVTOL aircraft market is characterized by an intense competitive scenario, where start-ups as well as established players are racing towards commercializing and deploying their aircraft in the market. Rise in the number of patent filings and product developments, and the race to certify aircraft is primarily being seen amongst key players.

These key players are developing strategic partnerships and focusing on collaborative technologies across the value chain. A large number of luxury car brands have initiated eVTOL concepts, and have prototypes ready to be deployed by 2025, marking the transition from ground-based to aerial autonomous transportation.

Global electric vehicle market is expected to reach a humungous revenue of $800 Bn by 2026 end, and grow at healthy CAGR of 23% during forecast period of 2021-26.

India electric vehicles market is expected to expand at a CAGR of 77% in terms of value during the forecast period (2017-2025).

The global electric bus market is set to grow exponentially at a spectacular rate by the end of the years 2027. The augmenting global focus on promoting electric mass transit solutions is expected to primarily drive this market growth..

Global electric vehicles market is projected to grow at an impressive CAGR of 15.6% in terms of revenue generated over the forecast period from 2016 to 2030.