The global dextrose monohydrate market is currently valued at US$ 4.5 Bn, and is forecasted to expand at a value CAGR of 4.5% and top a valuation of US$ 7 Bn by 2032.

The global market for dextrose monohydrate witnessed a CAGR of 3.6% during 2017-2021. Producers of beverages, confectionery, and bakery items are working on natural ways to keep their portfolios fresh for a longer period in order to make food products more appealing.

Dextrose derived from natural components serves an important role in the preservation process, as chemical preservatives today fail to fulfil the expectations of modern customers.

Customers' preferences for sugar alternatives have been increasing, owing to a growing population that suffers from various diseases and is intolerant to synthetic sweeteners, which has benefited sweeteners such as dextrose monohydrate. Dextrose is a sugar that is produced from corn starch and is naturally available.

As a result, rising demand for ingredients originating from natural sources is likely to boost dextrose monohydrate usage in various food products. Based on detailed analysis by Persistence Market Research, across 2022-2032, the global dextrose monohydrate market is expected to expand at a CAGR of 4.5%. 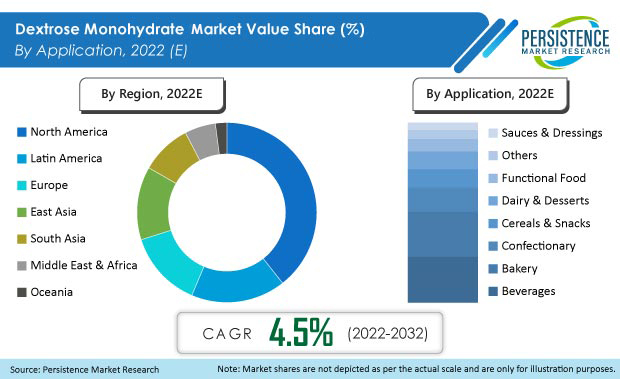 Consumers are increasingly expecting higher-quality, ready-to-eat, and ready-to-cook meat products. Rise of the processed meat market is being fueled by an increase in customer awareness and acceptance of the convenience of meat products.

Due to changing palates and consumer readiness to try new food products, as well as the desire for more proteins in the diet, an increasing number of customers are choosing meat-based breakfast options, including bacon, over other meal options such as pancakes.

Dextrose monohydrate is used in both, injection and immersion curing brines for meat curing to improve color development and salt access into the tissue. Dextrose also helps balance out salt's abrasiveness, improve overall flavor, and keep pH in check.

A variety of carbohydrates are utilized in the fermentation of dry sausages to ensure optimum balance in the formation of a defined microorganism population during fermentation and a well-controlled pH. Carbohydrate blends, including dextrose monohydrate, are increasingly being employed for quickly metabolizing finished sausages with good sensory characteristics, body, and flavor, boosting market sales.

Dextrose monohydrate powder is utilized for enhancing flavor in functional beverages such as high-fiber drinks, Ready-to-Drink (RTD) teas, fruit drinks, and other beverages to give them a sweet taste while lowering their calorie count.

The addition of quickly fermentable dextrose to the wort generated from malt and others in the brewing of low-calorie beers improves the proportion of sugar instantly accessible for fermentation, which results in a low-calorie beer with the usual alcohol level.

Due to rising consumer expenditure on food and a desire for happy indulgence, the confectionery business is gaining pace quickly across developing countries. Countries such as India, China, and Brazil are increasingly adopting the Western culture, with growing interest in gourmet cuisine.

Furthermore, as the incidence of diabetes and obesity rises in these emerging countries, food manufacturers are being influenced to utilize healthy sweeteners such as dextrose monohydrate in their confectionary items to entice consumers.

In these developing countries, the sugar substitutes business is in its early stages of development, and the confectionery industry appears to be rapidly expanding as disposable income rises. This is projected to provide profitable prospects for dextrose monohydrate suppliers to tap into unexplored markets and expand their global market presence.

What are the Factors Hindering Market Growth of Dextrose Monohydrate?

Excess dextrose consumption has been linked to disrupting body fat regulation and contributing to obesity. It has also been linked to a reduction in liver function and an increase in uric acid levels in the body. Dextrose monohydrate may have negative health consequences such as blood sugar issues, weight gain, and an increased risk of certain cardiac diseases.

Due to the need for low-calorie food items, manufacturers are increasingly researching artificial sweeteners as sugar alternatives, which are generated synthetically and help maintain low blood sugar levels while being readily available. Artificial sweeteners' widespread use in processed foods such as sweets, jellies, and powdered drink mixes is helping to drive up their sales.

Saccharin, sodium benzoate, and aspartame are examples of FDA-approved artificial sweeteners that have gained popularity in the food & beverage sector due to their ability to maintain taste. Aspartame is becoming more popular as a table-top sweetener, because of increased demand from manufacturers.  As it is considerably sweeter than sugar, manufacturers can use less of it to achieve the same amount of sweetness, saving money.

During the projected period, increased use of artificial sweeteners is expected to stifle dextrose monohydrate market growth.

Why is the U.S. a Leading Market for Dextrose Monohydrate in North America?

Which Country is Propelling the Latin America Dextrose Monohydrate Market?

The market in Brazil leads the Latin American region and is set to reach a valuation of US$ 517 Mn by the end of 2032.

Which Application of Dextrose Monohydrate is Offering Promising Growth Opportunities?

Consumer preference for low-sugar or no-sugar products is pushing manufacturers to utilize sugar alternatives in their products. Market value of beverage dextrose monohydrate in 2022 is US$ 1.15 Bn, and is slated to increase at a CAGR of 3.7% through 2032.

Demand for organic products is increasing due to rising health-conscious consumers across all regions. As such, consumption of organic dextrose monohydrate is expected to increase at a value CAGR of 5.4% to reach a valuation of US$ 589.6 Mn by the end 2032.

Worldwide spread of coronavirus had a severe influence on the global alternative sweeteners business. Many food & beverage companies have overseas production facilities in China, the Eurozone, and other Asia Pacific countries where coronavirus interrupted production and supply chains, affecting economies.

Due to disruptions in the supply chain and value chain, the demand-supply gap in the alternative sweeteners market has widened. According to the Institute of Supply Management (ISM), more than 75% of organizations around the world experienced supply chain disruptions.

Some of the most important manufacturers of dextrose monohydrate are based in the U.S. Import-export activities of the U.S. were significantly impeded because it was one of the countries hardest afflicted by COVID-19.

Key manufacturers of dextrose monohydrate are strategically investing in scaling up processing capacities to improve production and strengthen their presence in the market. Market players are also prioritizing new product development as well as strengthening their distribution capabilities.

What is the current valuation of the global dextrose monohydrate?

The global dextrose monohydrate market is currently valued at US$ 4.5 Bn.

What is the current valuation of the European market for dextrose monohydrate?

The Europe dextrose monohydrate market is currently valued at US$ 620.2 Mn.

What are the key trends influencing global demand for dextrose monohydrate?

What is the projected market share of Latin America by the end of forecast period?

The Latin America dextrose monohydrate market is anticipated to account for a market value share of 18.8% by the end of forecast period.

What market valuation is predicted for dextrose monohydrate in India by 2032?

Dextrose monohydrate sales in India are predicted to be valued at US$ 202.7 Mn by the end of 2032.

What is the market share of the top manufacturers of dextrose monohydrate?

How is the market faring in the U.S. and China?

The global food grade cellulose market has witnessed substantial growth in the past few years, and this trend is expected to continue through the course of the forecast period (2020 to 2030)..