Various educational bodies across the United States and Europe have imposed regulations pertaining to the compulsory use of desktop calculators after the eight-grade, owing to which the desktop calculators market is estimated to witness significant growth during the forecasted period. 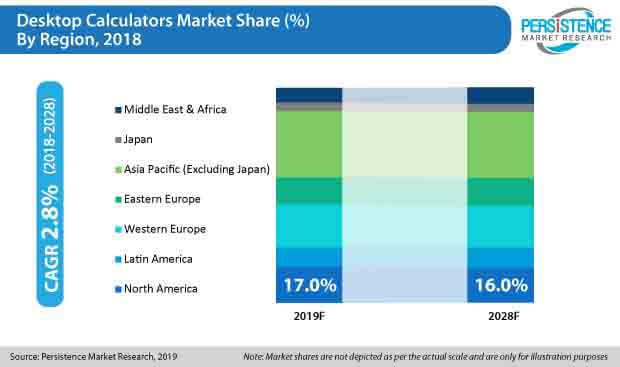 Digitization have offered enormous opportunities for growth across several industries, sectors, regions and company sizes. With several technological innovations and M&A activities, various vendors are offering specific application products for varied end-users. With the improvement in scientific education, scientific desktop calculators are predominantly being demanded. Moreover, several budding schools in the United States and other European countries have made it compulsory to use desktop calculator for basic arithmetic after the eight-grade.

. The use of desktop calculators can develop higher-order thinking and reasoning needed for problem solving within the information and technology based society. Desktop Calculators are also being used as an assistance for students and teachers for understanding and building fluency with arithmetic operations, algorithms and numerical relationships. Desktop calculators today are playing a key role in nurturing the student’s fluency with numbers and operations.

In February 2017, Canon USA dispatched new series of business and tax calculators in order to revamp their product offerings and improve overall customer experience. A company named Bowmar LLC developed the "Bowmar Brain" which was synonymous with the early pocket electronic calculator.

Originally an LED (light emitting diode) display manufacturer the company found out that they could not sell their displays to Japanese electronic calculator makers. However, in 2012, the company that sold these vintage style calculators have come into business again and have put forward their vintage calculators for the unsuspecting public.