This updated report on the dermatophytic onychomycosis therapeutics (DOT) industry anticipates the market expand 1.9X from its current worth of US$ 4.6 Bn by 2031. The research also suggests the market will progress at a positive CAGR of 7% over the next ten years. Germany is expected to account for nearly 1/4 market share in the European region.

Instances of fungal infection in nails have increased over the past years, as it is a common phenomenon whose prevalence increases with age. The risk of onychomycosis has significantly been prevalent in diabetic patients, with almost one-third of all diabetic patients being affected by it. 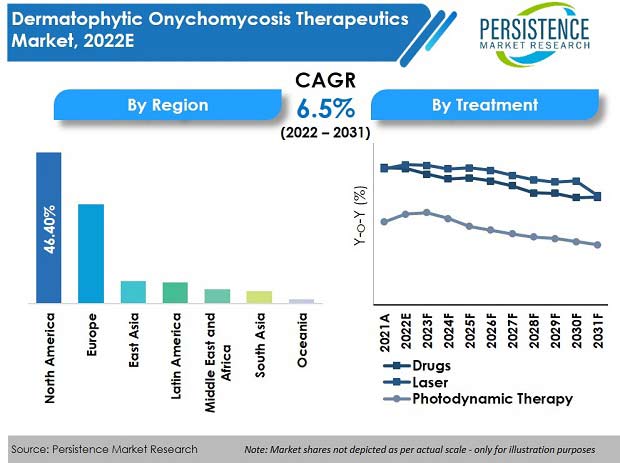 The prevalence of the nail fungus, i.e., dermatophytic onychomycosis, is increasing with the increasing incidence of chronic diseases, such as diabetes mellitus, peripheral vascular diseases, and psoriasis, among others. The risk is high in patients with athlete’s foot, genetic predisposition, HIV-positive patients, etc.

Prevalence of dermatophytic onychomycosis is estimated to be around 4–5% in tropical Asian countries, between 10% and 12% in North America, and up to 17% in European countries.

The global dermatophytic onychomycosis therapeutics market is projected to increase at a CAGR of 7% during the forecast period of 2021–2031, and reach a value of US$ 8.9 Bn by the end of 2031.

The global dermatophytic onychomycosis therapeutics market based on product type has been segmented into tablets and nail paints, which is again sub-segmented into prescription (Rx) and over-the-counter.

Global Market Study on Microbiome Therapeutics: United States Projected to be the Dominant Regional Market During 2018 - 2025

Global Market Study on Immuno-Oncology: Immune Checkpoint Inhibitors Segment Projected to be the Most Lucrative Segment by Therapy Type