The global construction industry is registering steady growth due to high rate of urbanization and increasing demand for roads, rails, buildings, etc. due to the growth in population. Governments of various economies across the globe are focusing on development of transportation infrastructure. Such initiatives by various governments will boost construction projects across the globe and in turn, result in growth of foundation work, which in turn, will fuel the demand for vibratory hammers. Moreover, technological advancements in hydraulic fracturing have resulted in a major shift from conventional utilities production to non-conventional shale gas and tight oil production. Growing production of shale gas and tight oil, especially in the U.S. and Canada, is expected to result in an increase in foundation works for production facilities of shale gas and tight oil and thus, is likely to amplify the demand for vibratory hammers. 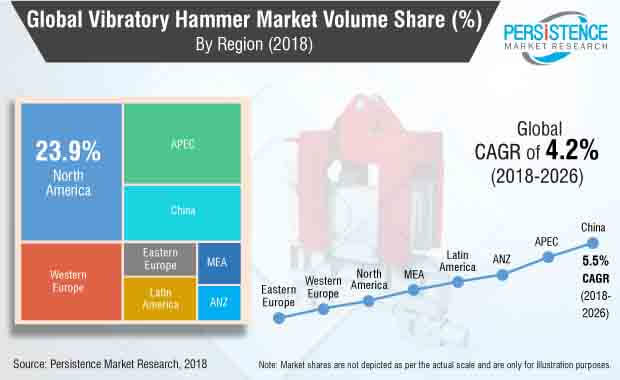 Our research methodology for this study on Vibratory Hammer market is based on some key points, such as Defining Research Problems and Objectives; Collecting, Analyzing and Interpreting Information; Selecting Methods of Data Collection; and Deciding the Type of Data and Developing the Final Research Plan. During the research, we conducted a deep dive research analysis on the applications of Vibratory Hammers. Our team collected data pertaining to new vibratory hammer sales per region and country from various sources, such as vibratory hammer manufacturers’ annual presentations & reports_bk_01_01_2020. We also conducted primary interviews with vibratory hammer manufacturers, suppliers and experts who have vast experience in the vibratory hammer market.

Key Questions Answered in the Report

This Persistence Market Research report carefully analyses the vibratory hammer market at a global and regional level through market segmentation on the basis of key parameters such as mounting, centrifugal force and end use industry. The primary objective of the report is to offer key insights on market updates, competition positioning, current trends, market potential, growth rates and other relevant information and statistics in a suitable manner to the readers or various stakeholders in the vibratory hammer market.

The next section of the report presents a summarized view of the global vibratory hammer market based on eight prominent regions considered in the study. The section includes regional market position, growth potential, trends and attractiveness analysis for each of these regions.

All the above sections evaluate the present market scenario and growth prospects in the global vibratory hammer market while the forecast presented in the sections assesses the market size in terms of volume and value.

In order to offer an accurate forecast, we started by sizing the current market, which forms the basis of how the global vibratory hammer market is expected to develop in the future. Given the characteristics of the vibratory hammer market, we triangulated the outcome of three different types of analysis: primary research, secondary research and our own analysis. However, forecasting the market in terms of various vibratory hammer segments and regions is more a matter of quantifying expectations and identifying opportunities rather than rationalizing them after the completion of the forecast exercise.