In terms of revenue, corticosteroids in the uveitis treatment type segment is the largest segment and is expected to keep constant traction during the forecast period, owing to be used as a first line treatment for uveitis. These are used in different formulations from eye drops to sustained release drug formulations. 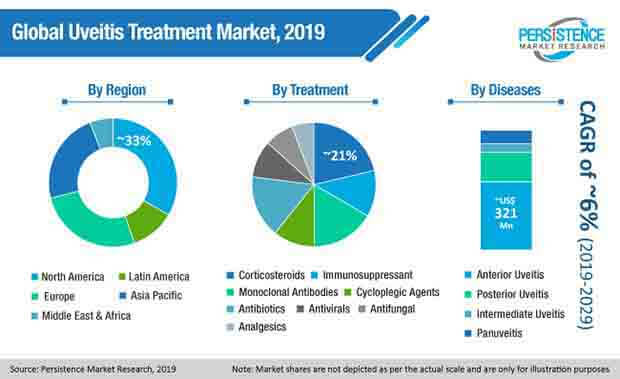 Infection remains the key source of uveitis in developing nations, such as India, and others. Whereas, in developed countries, idiopathic uveitis, an organ-specific immune inflammatory process, has been touted as the prime source of the disease. Infectious uveitis accounts for considerable revenue shares of more than 85% in the market owing to increase in the prevalence of infectious diseases in developing countries. ~57% of the total revenues of uveitis treatment market is accounted by anterior uveitis, followed by posterior uveitis. The prevalence of the former is observed to be higher across all the regions, as indicated by surveys.

Major players in uveitis treatment are focusing on introducing steroid implants, which is proving out to be significantly accepted for drug delivery in case of noninfectious posterior uveitis.

Moreover, key players are increasingly inclined towards developing drug formulations, which act as an adjuvant therapy for uveitis treatment. Adjuvant immunosuppressing agents in uveitis treatment are frequently been used these days, which has shown better results in the past.

Companies are investing in research and development activities to develop non-steroidal injectable for uveitis treatment as corticosteroids have a potential side effects in long term use.

Incidences of adverse effects related to uveitis treatment medication such as irritation, watery eyes, and others are increasing among patients. These factors are becoming major challenges for healthcare professionals and institutions as few studies regarding the efficacy of agents used for treating uveitis are present

. Moderate prevalence and very limited first line drugs are other challenges for the growth of the uveitis treatment market.

Moreover, eye care products for uveitis treatment need unique manufacturing process for making products appropriately aligned with GMP regulations for sterile products. Since formulations are prone to get affected by pathogens present in the environment, they are formulated under highly protected area, which poses a major challenge facing manufacturers to fulfil the criteria as mentioned in GMP and other regulatory guidelines.

North America will continue to be the prominent regional market for uveitis treatment due to rising burden of increasing prevalence of infectious uveitis and growing elderly population.

North America holds significant market share in the uveitis treatment market with ~33% of total revenue and is expected to grow with a CAGR 6.0% in the forecasted period. On the other hand, Europe represents second most lucrative region in the uveitis treatment market and is expected to grow 5.9% in the forecasted period with ~27% of market share due to growing R&D initiatives as well as rising healthcare expenditure in this region.

Allergan. Inc., Novartis AG; Santen Pharmaceutical Co., Ltd and AbbVie Inc.; are among the leading market players in the uveitis treatment market. Other manufactures, such as Eyegate Pharmaceuticals and Alimera Science Inc, are increasing their footprint in developed and emerging economies globally.

They continue to dominate the market landscape of uveitis treatment due to investment in research and development, product diversification, and strategic partnerships and acquisitions in order to enhance product and customer base.

In Sept 2019, Alimera launched ILUVIEN in Germany, is the second country in Europe, in which ILUVIEN is now commercially available to be prescribed to patients suffering from Non Infectious Posterior Uveitis (NIPU). In Feb 2019, Alimera Science received approval for ILUVIEN from Ministry of Health in Lebanon.

Companies with research and development capabilities and technological prowess will gather momentum and profitability in the uveitis treatment market. Leading players who are leveraging technology and approved novel products will continue to grow exponentially and have a vast market revenue share.

Global Emergency contraceptive pills market to reach US$ 1,230 million, and is expected to exhibit sluggish growth and reflect less than 3% CAGR during 2017-2022.

Increasing geriatric population and rising incidence of chronic diseases such as diabetes, cancer, and cardiovascular diseases will drive the growth of the pharmaceutical excipients for taste masking market, globally, at a CAGR of over 5% through 2030..

Dysphagia management is expected to grow at a healthy CAGR between 2019 and 2029, according to PMR’s research report. .