Extensive Control of the Site Offered by Snow Making System

Manufacturers of snow-making systems, through their diversified product portfolios, offer software-incorporated systems to face challenges such as dealing with unfavorable economic conditions and adaptability to weather conditions. Software is installed by companies in snow-production sites, which helps provide a clear layout of complex data and an assessment of the entire process, thus facilitating operation. This software also helps keep track of all the alerts, messages, and faults of the entire control system through a notification center. Complete information about all the snow guns in operation and slopes for the entire snow-making system is provided through this software. Moreover, the “quick view” option displays the current average temperature and current flow of the snow-making system.

Twisting of Seasons and Drastic Changes in Climatic Conditions

The most important element of ski area operations is the snow-making process that efficiently works to produce maximum snow output. Snow-making systems, regardless of fluctuating climatic conditions, effectively generate snow in ski areas using less water and energy. Furthermore, a specific weather study is initiated before designing a new or retrofit snow-making system. Along with this, the reservoir, water supply, and pumping capacity of the snow-making system are matched and carefully calculated to meet the desired requirements.

Majority of ski areas invest millions of dollars on the installation of snow-making systems. In addition, ski resorts have been proactively implementing systems to adapt to more erratic and frequent winters by enhancing their snow-making capacity by up to 60% over the past two decades.

Significant Increase in the Tourism Industry

Skier visits are estimated to witness an upward trend across the globe after three years of stagnation as opposed to most markets that are likely to exhibit mature profiles and low renewal of customer base. The Western skier market is likely to flatten. However, the skier market in China is expected to develop majorly, which is estimated to drive the tourism as well as snow-making systems market in the country. In addition, adventure tourism is gaining significant traction across China owing to a nationwide passion for winter sports and Beijing Winter Olympics in 2022, which has significantly increased investments in the snow-making systems business.

For instance, in 2015, China built around 108 ski resorts, of which majority are small resorts, and this has boosted the number of ski visitors by 21%.

On the basis of end use, the global snow making system market is segmented into ski resorts, indoor stadiums, amusement parks, and others (restaurants, hotels, etc.).

Based on regions, the global snow making system market is segmented into Americas, Europe, Asia Pacific, and Rest of the World (RoW). 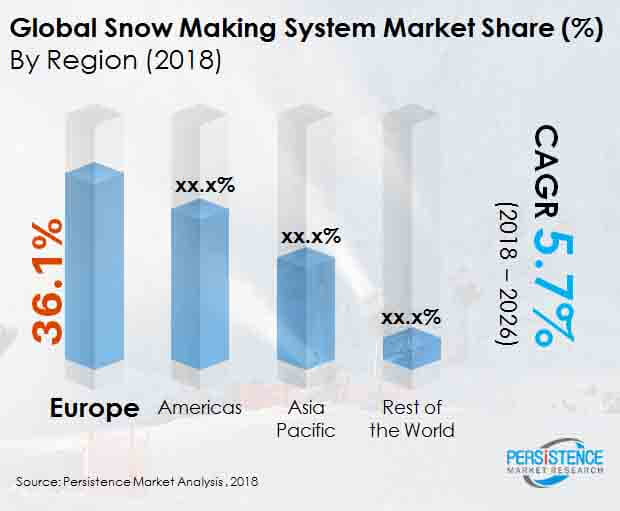 By end use, the ski resorts segment is estimated to dominate the market in terms of value with a share of 86.7% by the end of 2018.

To understand and assess opportunities in the snow making system market, we have divided the report into two sections based on market segmentation as under:

The market value for all segments is taken in US$ thousands and the market volume is taken in units, unless otherwise stated in the snow making system report.

In the final section of the report, a competitive landscape has been included to provide report audiences with a dashboard view. The report provides a detailed market share analysis of the snow making system market on the basis of key manufacturers. Comprehensive profiles of manufacturers are also included within the scope of the report to evaluate strategies, key offerings, and recent developments in the snow making system market.

Market volume is inferred through in-depth secondary research and validated from industry experts through primary interviews. Each interview is thoroughly analyzed and an average market volume is deduced & reconfirmed prior to incorporating into the report. The average price of snow making system is deduced on the basis of end use, where the average price is inferred across all the four assessed regions. The market value of the snow making system market is thus calculated from the data provided by the average selling price and market volume.

For the 8-year forecast of the snow making system market, various macroeconomic factors and changing trends have been observed that give an idea about the future of the market. Other important factors considered to arrive at market forecast include the size of the current market, inputs from the demand side & the supply side, and other dynamics shaping the scenario of the market.

In the compilation of the report, the forecast is conducted in terms of CAGR, while other important criteria such as year-on-year growth and absolute dollar opportunity have also been incorporated thus presenting the client with crystal clear insights and future opportunities as far as the snow making system market is concerned.