According to a study published in NCBI, the total incidence of radiographic malpositioning of catheters is around 3%. To solve this issue, PICC tip placement systems are widely used and they also come with the additional advantage of cost-effectiveness.

PICC tip placement systems are usually comprised of tip location systems and accessories associated with these devices, such as integrated catheters, ECG cables, ECG clip cables, and ECG lead sets. In the peripherally inserted central catheters (PICC) and central venous catheters technique, the most common issue is the malpositioning of catheters, and to overcome this issue, tip location devices are widely adopted.

PICC tip placement systems are more precise in comparison to traditional methods such as chest X-rays, as this procedure requires more time due to the repetition of the process to locate the exact position of the catheter.

Growing demand for PICC tip placement systems is expected to drive the adoption rate of this technology and will gain the attention of manufacturers of vascular access devices, which will directly augment market growth.

Rising pervasiveness of chronic disorders has led to increased volumes of surgeries, thereby increasing the demand for different kinds of catheters. As such, the development of new and innovative central vascular access techniques and devices is encouraged for the multitude of indications and also to understand cardiac physiology.

The tip locator is a result of technological advancements that use electrocardiograms, along with magnetic tracking and intravascular dopplers to guide the positioning of catheters in superior vena cava and at a cavoatrial junction. Increasing innovation in imaging catheter technology is likely to contribute to the demand growth of PICC tip placement systems.

Besides, focusing on research and development activities coupled with new product offerings will drive market growth over the coming years.

Growing clinician and physician confidence in such technologies, as well as increased patient knowledge, is expected to propel PICC tip placement device demand forward. The overall growth of the market is likely to be fueled by rising awareness of cost-effective and more precise devices, such as ECG tip confirmation systems and low-cost treatment choices in developing nations.

Considering this, Persistence Market Research expects the global PICC tip placement systems market to expand at a healthy CAGR of 5.7% through 2032. 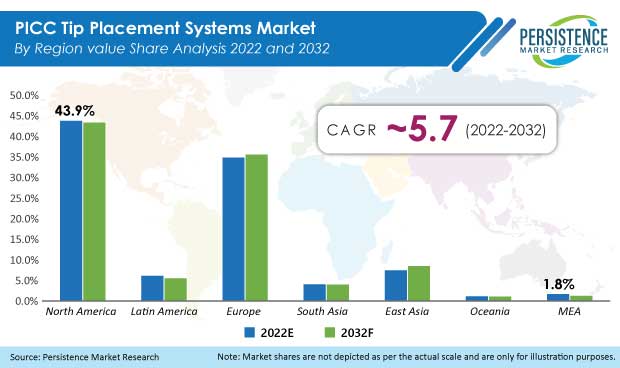 For the precise placement of catheters, improving the reliability of parameters through technological advancements in sensors is expected to provide unique opportunities. To increase the reproducibility and reliability of results to track a PICC tip location, innovation while developing imaging software is necessary to influence physicians regarding the adoption of PICC tip placement systems over other procedures.

Manufacturers are focusing on innovation by integrating technologies to come up with advanced systems to deliver quality guidance to physicians and PICC nurses while PICC insertion.

“Dearth of Skilled Professionals for the Job”

PICC tip placement system usage is limited to certain patients, as many patients suffer from severe tachycardia, atrial fibrillation, and pacemaker-driven rhythm, which further restrains the accuracy of tip confirmation through PICC tip placement systems, as these conditions cause alteration in the P-wave generated by the heart.

In such conditions, the use of chest X-rays or fluoroscopy is preferred for the confirmation of a PICC tip location.

What Makes the U.S. the Largest Market for PICC Tip Placement Systems?

“Fast-Track Regulatory Approvals in the U.S.”

The U.S. is the largest and most profitable PICC tip placement systems market, holding a market share of around 92.5% in 2021 in North America. The U.S. market is expected to register a CAGR of 5.7% during the forecast period.

In terms of revenue contribution, the U.S. PICC tip placement systems market share is anticipated to remain dominant during the forecast period due to streamlined approval procedures by the U.S. FDA, allowing faster product uptake, primarily in PICC placements.

Will Germany Be a Lucrative Market for PICC Tip Placement System Suppliers?

“High Demand for Intravenous Drug Delivery in the Country”

Germany dominated the European market for PICC tip placement systems and accounted for 21.7% market share in 2021, mainly due to the increased incidence of chronic diseases such as cancer, rheumatoid arthritis, and renal failure in the country. These indications are fueling the need for intravenous drug delivery systems across the country.

Moreover, partially government-funded healthcare systems in the country are leading to companies winning government contracts for the supply of PICC tip placement systems to public hospitals.

How is China Emerging as a Prominent Market for PICC Tip Placement Systems?

China is forecasted to be the most attractive market in the East Asia PICC tip placement systems market, accounting for the largest market share of 41.2%, due to device utilization rates being high for patients aged over 50 years and among female patients across this country.

In terms of revenue contribution, China’s PICC tip placement systems market share is anticipated to remain steady during the forecast period, with the market expected to increase at a CAGR of 7% through 2032.

Why are Tip Location Product Widely Used across Regions?

Tip location systems accounted for the highest share of 81.4% in 2021 and their demand increased at a CAGR of 6.2%.

Tip location systems deal with detecting the location of catheter insertion to avoid complications and reduce the error rate, and are preferred over conventional methods such as X-rays. This factor is positively influencing the adoption rate of these devices and driving market growth.

ECG tip confirmation systems eliminate the need for X-ray confirmation to check the final location of inserted peripheral central catheters and reduce the cost of treatment with less radiation exposure.

These devices also provide a high precision rate, which leads this segment to have accounted for the largest market share of 70.4% in 2021.

The COVID-19 pandemic compelled the healthcare system to strengthen existing medical processes and avoid exposing patients to the risk of contamination by health workers. The venous access device is one such example. The use of a few smart strategies, such as choosing long dwelling catheters (midline catheters) over short venous cannulas, using PICCs for COVID-19 patients in intensive care units, and using wireless probes for easy-to-carry and clean ultrasound-guided venipuncture.

To avoid X-rays, alternate methods for tip localization such as intracavitary electrocardiography or trans-thoracic echocardiography, are critical. Barrier precautions are recommended by worldwide guidelines for maintaining patient care.

PICC tip placement system manufacturers are constantly improving their forward integration capabilities in the value chain to establish and enhance their distributor networks. A key strategy adopted by manufacturers is the acquisition of other companies to expand their business scope.

How is the PICC tip placement systems market faring?

What is the sales forecast for PICC tip placement systems?

The PICC tip placement systems market is expected to reach US$ 210.5 Mn by 2032, with sales revenue expected to increase at 5.7%.

Which is the most lucrative market for PICC tip placement system manufacturers?

North America accounted for 43.9% of the global PICC tip placement systems market in 2021.

What are the key trends in this market?

What are the key market statistics for Japan?

What are the top 5 countries driving the most demand for PICC tip placement devices?

Revenue from the sales of examination and surgical gloves amount are expected to attain a valuation of US$ 13.9 Bn by the end of 2031.