Widely adopted, traditional chemotherapy has remained the cornerstone for first-line treatment for advanced cancers traditionally. There is an abundant interest in the idea of dodging such modestly effective but potentially toxic approach with vaccine targeted cancer therapies or virus immunotherapies that hold significant promise of superior efficacy and improved quality of life.

While forerunners such as Bristol-Myers Squibb, Merck, and Roche have the most developed portfolios of immunotherapy drugs, AstraZeneca and Glaxo are known for excellent portfolios of early checkpoint-based immunotherapy approaches. The revenue expectation for most of these drugs is approximately US$ 1 Bn.

Amgen has an existing product portfolio of oncolytic virus, and combination trials with other cancer therapies are in the pipeline. Certain estimates dictate the overall immunotherapy market to gain as much as a 50% share of the overall cancer treatment market within the next decade. It is an expectation that is coming into reality with every regulatory approval obtained by the key players in this field.

A new study by Persistence Market Research predicts that the global oncolytic virus immunotherapy market will be valued at ~ US$ 214 Mn by 2029-end, expanding at a promising CAGR of ~12% during the forecast period of 2019-2029. 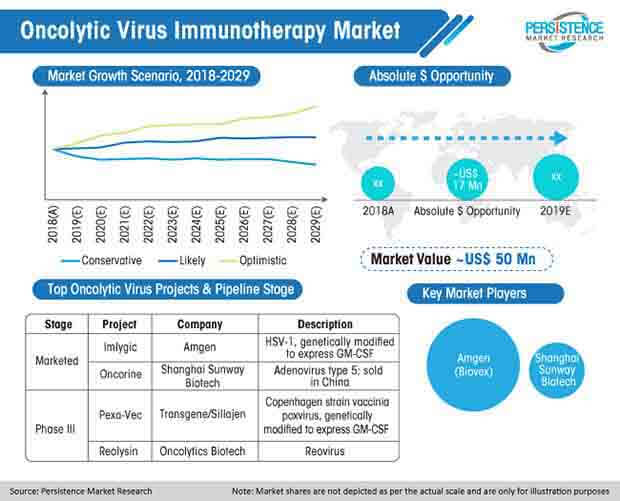 Over the past five years, more than 70 new cancer treatments have been launched and are utilized for treatment in over 20 different types of tumor. Moreover, new treatment options are available since the past five years, and the surge in innovation is anticipated to increase the number of candidates in clinical stage development by an outsized and varied group of biopharmaceutical companies. Further, the pipeline of cancer drugs in early clinical development has increased by more than 60% over the past decade, with almost 90% of the focus on targeted agents.

The onset of skin cancer has also increased the rate of melanoma skin cancer affected patients. According to a data published in National Cancer Institute (NCI), a significant reduction in the cancer growth and a well-tolerated immune response have been generated during the studies signaling positive adoption from researchers and clinicians.

Governments in various developing countries have been taking initiatives to spread awareness regarding different causes of cancer. In order to reduce mortality and morbidity rate, governments in developed and developing countries are conducting awareness campaigns to encourage people to opt for early diagnosis of cancer, which in turn are expected to increase the pool of patients likely to opt for various immunotherapies.

For instance, Public Health England – an executive agency of the Department of Health and Social Care in the U.K. – started “Be Clear on Cancer” campaign aimed to improve early diagnosis of cancer by raising public awareness. The growing awareness is likely to fuel the demand for advanced treatment and novel therapies for the treatment of cancer, melanoma and breast cancer being the most prevalent cancers.

Activities in oncolytic research has surged over the past few years. Number of publications on oncolytic and immunotherapy research has increased by 400% between 2012 and 2018. The global oncolytic virus immunotherapy market holds huge growth potential, and multiple clinical studies are underway with over 35 companies operating in this space.

However, 90% of these oncolytic drug candidates are in the late stage of discovery or in preclinical phase, where there is great uncertainty around the success of these molecules to reach the clinical phase and launch a new drug molecule. Failure of these molecules in late stage of clinical developments may be leveling off for companies operating in the oncolytic virus immunotherapy market.

In terms of value, North America is estimated to be the prominent region for the global oncolytic virus immunotherapy market in 2019, and is expected to grow at a significant CAGR over the predefined timeframe, owing to high prevalence of cancer, specifically melanoma cancer in the region.

Amgen and Shanghai Biotech are some of the major players currently accounting for substantial share in the global oncolytic virus immunotherapy market. Furthermore, definitive pipeline products from other manufacturers such as Transgene/Sillajen, and Oncolytics Biotech are projected to offer significant growth opportunities.

Seeking approval for multiple indications as an adjuvant-line therapy, immunotherapy is gaining increasing momentum in the overall oncology drugs market. Expanding the product pipeline is one of the important factors to expand the profit margin.

In September 2018, Boehringer Ingelheim acquired Viratherapeutics completely for the sum of USD 245 Mn as an upfront payment and expanded their business of oncolytic virus immunotherapy specific VSV-GP project, which is in the early stage of preclinical development.

A comprehensive perspective of the oncolytic virus immunotherapy market has led our analysts to infer that the market is growing at a remarkable rate, with Europe and North America leading the global market.

In addition, the growing inclination of venture capitalist on early stage startups in oncolytic virus are about to fuel the competition in the global oncolytic virus immunotherapy market.

Global market for thermal ablation devices is expected to reach a valuation of about US$ 8 Bn by the end of the period of 2017-2015 from a value of around US$ 4.7 Bn.