Global Market Study on Moissanite: North America to Be the Most Lucrative Region and Also To Witness Highest Growth By 2025

Moissanite is a lab-created gemstone that is generally perceived as a diamond substitute by consumers. Moissanite is composed of silicon carbide and is created through a thermal process that is patented by Charles & Colvard Ltd, the only manufacturer of Moissanite across the globe. Moissanite has a refractive index of 2.65. Its hardness on Mohs scale is 9.5, which makes Moissanite highly scratch-resistant.

Moissanite is available at one-tenth price of the diamond. The differences between the two stones are pretty difficult to spot and can only be detected by a trained eye. Moissanite is also more durable and does not exhibit a yellowish color, unlike other diamond substitutes after a definite period of time.

The global moissanite market is anticipated to grow from US$ 25.5 Mn in 2014 to US$ 48.83 Mn by 2025, expanding at a CAGR of 6.2% during the forecast period (2015–2025). Rising disposable income, coupled with increasing the inclination of consumers towards pocket-friendly luxurious jewelry products is expected to drive the global market growth over the forecast period. In addition, rising consumer adoption of moissanite as a gemstone similar to diamond is further expected to fuel the market growth.

In 2014, the North America moissanite market was valued at US$ 22.46 Mn and is expected to reach US$ 43.56 Mn by the end of 2025. In terms of value, the market in the region is expected to account for the highest CAGR of 6.3% over the forecast period, followed by the Europe market. Unlike moissanite, other synthetic diamonds such as cubic zirconia lose their luster after a certain period of time, due to which consumer preference in Europe is shifting towards the moissanite stone, which is expected to fuel the market growth across the region further over the forecast period.

Currently, Charles & Colvard, Ltd. is the only player operating in the market. Meanwhile, Cree Inc. and Norstel AB are the key raw material suppliers in the global moissanite market. 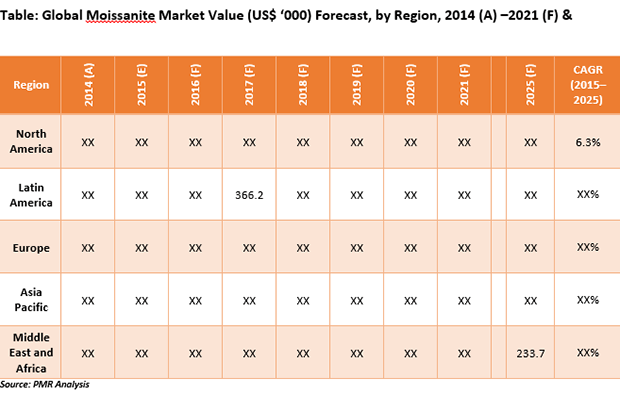