Favorable regulations to use mobile devices on flight: Introduction of favorable regulations that permit use of personal electronics devices during all phases of flight to watch videos, read e-books and play games is creating significant opportunity for in-flight Wi-Fi services providers.

Growing focus of airlines to enhance passenger experience: Major airlines are emphasizing on equipping their aircraft with cost-effective high-speed Wi-Fi systems based on advanced technologies in order to offer uninterrupted internet services to passengers, thereby enhancing the overall passenger experience and satisfaction. Airlines across the globe are also focusing on deploying advanced connectivity technologies on flights in order to gain first mover advantage and to get a technology edge over competitors. This, in turn, is fueling growth of the global In-flight Wi-Fi market. 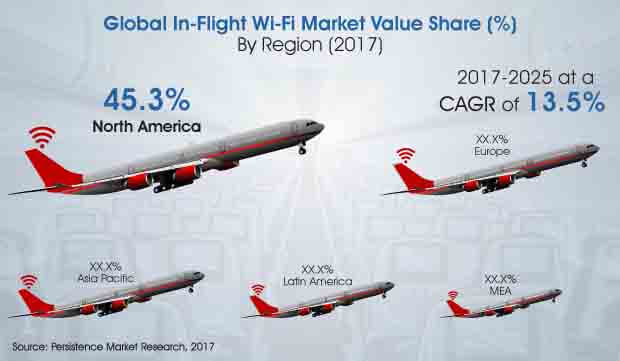 Airlines shift towards satellite technology: Major airlines, especially in developed countries such as the U.S. and Canada are shifting from air-to-ground technology to satellite networking technology, as it offers high bandwidth capacity and helps airlines enhance the overall passenger experience. Also, airlines in developing regions are entering into partnerships with major players that offer satellite-based connectivity and content services, in order to deliver high-speed internet services to gain a competitive advantage in the global market.

Growth in acquisitions & mergers: The global In-Flight Wi-Fi market has witnessed a surge in mergers and acquisitions in recent years. This trend is anticipated to continue over the next few years, as major global players are focusing on enhancing their presence and existing product portfolio, and are strategically eyeing regional markets.

Persistence Market Research offers an eight year forecast for the In-Flight Wi-Fi market between 2017 and 2025. This study demonstrates the market dynamics and trends globally across the regions North America, Europe, APAC, Latin America and Middle East and Africa which influence the current nature and future status of the In-Flight Wi-Fi market over the forecast period.

In the final section of the report, we include a competitive landscape to provide clients with a dashboard view based on categories of providers in the value chain, presence in the global In-Flight Wi-Fi portfolio and key differentiators. This section is primarily designed to provide clients with an objective and detailed comparative assessment of key providers specific to a market segment in the In-Flight Wi-Fi value chain and the potential players for the same. Report audiences can gain segment-specific vendor insights to identify and evaluate key competitors based on an in-depth assessment of capabilities and success in the marketplace. Detailed profiles of providers are also included in the scope of the report to evaluate their long-term and short-term strategies, key offerings and recent developments in the global In-Flight Wi-Fi market.

This report evaluates the present scenario and the growth prospects of the In-Flight Wi-Fi market across various regions globally for the period 2017 –2025. We have considered 2016 as the base year and provided data for the trailing 12 months. The forecast presented here assesses the total revenue by value across the market. In order to offer an accurate forecast, we have started by sizing the current market, which forms the basis of how the global In-Flight Wi-Fi market will develop in the future. Given the characteristics of the market, we have triangulated the outcome of different analyses based on the technology trends. In addition, it is imperative to note that in an ever-fluctuating global economy, we not only conduct forecasts in terms of CAGR, but also analyze the market on the basis of key parameters such as year-on-year (Y-o-Y) growth to understand the predictability of the market and to identify the right opportunities across the market.