Global Market Study on In-Dash Navigation System: Europe to Remain Dominant in the Market During 2017-2022

Owing to the busy lifestyle of people, demand for vehicles with in-built provision of real-time traffic information is on a rise. Consumers are also preferring vehicles that are not only aesthically-pleasing but also high on functionality.

New vehicle norms imposed by regulatory bodies have encouraged automakers to focus on high-efficiency vehicles. As in-dash navigation systems play an important role in offering information associated with traffic-jams and shortest routes to reach intended destinations, they are being offered as a standard feature in many models.

Other major macroeconomic factors influencing the market growth include steady growth in the automobile sector and increasing disposable income of people in developing as well as developed countries.

Original equipment manufacturers (OEMs) are concentrating on the provision of embedded and technologically advanced vehicle systems, capable of offering several functions in one unit. OEMs, with highest production capacities of passenger vehicles, are now offering in-dash navigation systems for hatchback vehicles, for gaining consumer popularity and a competitive edge in the market. Moreover, rise in demand for lightweight vehicle components, and legislations for emissions across developed economies are further expected to drive demand for in-dash navigation systems. 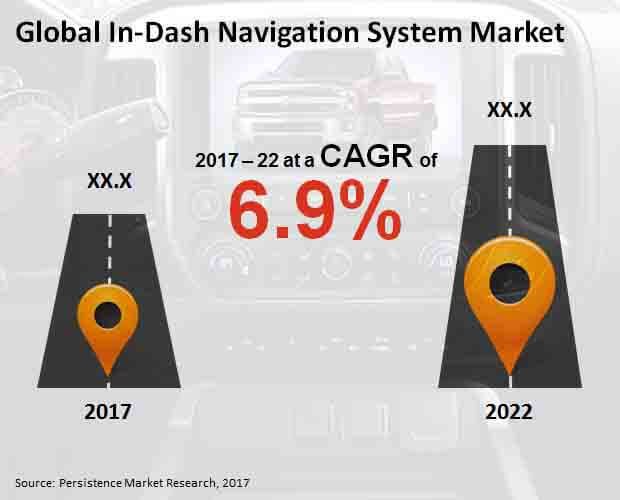 Asia-Pacific excluding Japan (APEJ) is expected to account for nearly one-fourth share of the market, in terms of revenues. Developing APEJ economies such as India and China are estimated to remain lucrative in the market. Europe will remain the largest market for in-dash navigation systems. In-dash navigation system sales will remain steady in North America, on account of surging sales in the US.

In-dash navigation systems are available in a wide range of screen sizes – from 4 inches to nearly 8 inches. Currently, 4 inch screen remains the preferred size, with ‘7 to 7.9’ inches growing at the fastest CAGR.

Passenger Cars to Remain Dominant in the Market

Based on vehicle type, mid-sized passenger cars will remain dominant in the global in-dash navigation systems market, followed by light commercial vehicles and heavy commercial vehicles. However, sales of in-dash navigation systems in compact passenger cars are expected to exhibit the fastest expansion during the forecast period.

Recently, a report titled, “In-Dash Navigation System Market: Global Industry Analysis 2012-2016 and Forecast 2017-2022”, has been published by Persistence Market Research (PMR), which offers an extensive assessment of the global in-dash navigation system market. In this report, key trends impacting expansion of the market are included, coupled with regional analysis, market segmentation and information on key players thriving for leading position in the market.

For deducing the market size, various aspects based on secondary research are considered in the report. To provide a detailed analysis, the market has been segmented on the basis of sales channel, vehicle type, screen size, display, and region. Along with secondary research, qualitative inputs from primary respondents and in-house panel of industrial experts have been incorporated in the report for arriving at appropriate market estimates. While developing the market forecast, the report focuses on sizing the current market data, which forms the base for future market forecasts.

A key feature of report is analysis of in-dash navigation system market, with the provision of corresponding revenue forecasts based on absolute $ opportunity, as it is imperative in the assessment of opportunities sought by providers in the market for identifying and achieving potential resources based on a sales perspective. The report has developed market attractiveness index for understanding performance and growth of key market segments.