Increasing load of chronic pain because of rheumatic conditions across the world is expected to raise demand for fibromyalgia treatment over the coming years. Fibromyalgia is a complex and common chronic pain disorder that leads to fatigue, musculoskeletal pain, and localized tenderness, influencing individuals physically, mentally, and socially. Road traffic injuries are increasing at a shocking rate across regions, which further leads to increasing occurrences of fibromyalgia.

Psychiatric disorders are progressively prevalent in the event of fibromyalgia, and post-traumatic stress disorders are additionally seen with rising incidence rates. Globally leading companies, in order to maintain their market position, are acquiring companies who are facing a large number of product recalls. On the other hand, favourable reimbursement policies and increasing healthcare expenditure are also some factors driving market growth.

A new report by Persistence Market Research details market trends in 20+ high growth countries, along with the impact the COVID-19 pandemic has had on the healthcare industry in general, and on the demand for fibromyalgia treatment in particular.

The market is projected to experience rapid development during the forecast years of 2021 to 2031, as the number of surgeries and trauma cases is rising worldwide. As fibromyalgia is related with age, rising population of people aged above 60 years around the world is a factor that will increase the occurrence of fibromyalgia. Moreover, manufacturers are focusing on partnerships, which provides significant opportunities for the growth of companies within the market.

According to Persistence Market Research’s analysis, the global fibromyalgia treatment market is projected to progress at a CAGR of around 7% from 2021 to 2031

How is Increasing Burden of Fibromyalgia Boosting Market Growth?

Fibromyalgia is a long-term chronic disorder that is characterized by widespread muscular pain, and is often associated with fatigue, sleep disorders, memory, and mood swings. Symptoms of fibromyalgia are often misunderstood for arthritis or joint inflammation; however, the disease does not show any sort of muscle or joint inflammation. Instead, pain and discomfort are observed in soft tissues. Fibromyalgia is caused due to various factors such as chronic back pain, trauma, osteoarthritis, road accidents, and musculoskeletal disorders.

Fibromyalgia affects an estimated 10 million people in the U.S., and has an estimated prevalence of 3%-6% globally. This disorder is diagnosed and often seen across juveniles, men, and women, with it being more prevalent in women, with 75%-90% of the total FM patients (Source: National Fibromyalgia Association (NFA)). Also, in the U.K., estimated prevalence of fibromyalgia is around 5.4%, which is approximately 1 in every 20 people (Source: Versus Arthritis, 2019).

Such high prevalence of the disease is expected to increase demand for better treatment along with effective medications that lower associated pain and tenderness. Thus, demand for improved treatment for fibromyalgia is expected to provide a positive impetus to market growth. 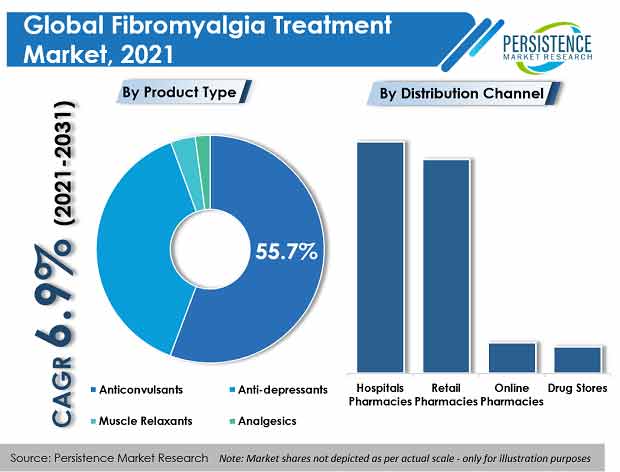 Given the current landscape of the growing burden of fibromyalgia cases, globally, there are very lesser therapies approved for the same. Thus, to cater to the larger patient pool, various leading industry players are engaged in the research & development of new drugs, resulting in positive results, gaining a nod for moving the drugs from early stages into advanced phases of trial.

For instance, there are various potential drug candidates such as ICM 1 (Viros Therapeutics), NYX-2925 (Aptinyx), DS-5565 (Daichi Sankyo), and TD-9855 (Theravance Biopharma) that are in phase 2/phase 3 stages of clinical trials.

Thus, availability of treatment options with commercialization potential is expected to augment the growth of the global fibromyalgia treatment industry over the coming years. Also, such developments will enable leading players to strengthen their existing portfolios and expand their presence across the world.

Will  Need for Lower Cost Treatment Alternatives Lead to Development of the Market?

Treatment cost with branded drug is significantly higher, and it is expected to remain higher when compared with generic drugs or other off-label drugs. These higher costs will drive demand for generic versions of products.

Some of the blockbuster fibromyalgia drugs such as Lyrica, Savella, and Cymbalta have already or are expected to witness patent expiration, leading to the development of generic products within the time frame of 2021-2031. Generic versions of these drugs are likely to see lucrative growth in low-income economies or in economies where these products are limited or not available.

Will the U.S. Offer Lucrative Opportunities to Market Players?

The medical services system of the U.S. is well eminent for its high level expenditure and infrastructure. The care system of hospitals and care centers are abode by administrative principles and insurance strategies. The United States holds the largest share in the global market attributable to increasing cases of chronic rheumatic diseases, rising awareness among people, and growing healthcare expenditure.

Why is Demand for Fibromyalgia Treatment Increasing across the U.K.?

The U.K. healthcare system possesses a well-developed infrastructure, largely supported by the government. It is perhaps the best healthcare system in the world. It is not surprising that the U.K. has the most elevated level of expenditure in Europe. The U.K. is recognized as a main market, and the position is probably going to remain the same through the forecast years.

Why is China Dominating the Market for Fibromyalgia Treatment in APAC?

China is projected to observe strong development over the estimated timeframe, which can principally be owed to increasing per capita spending of people in the country. Developing private bodies for research and amendments and increasing reimbursement policies in healthcare and financial support provided by governments are major reasons expected to proper demand for fibromyalgia Treatment over the coming years.

The more the elder population the more is the occurrence of chronic diseases, which increases the need for rapid treatment, thus raising demand for fibromyalgia treatment.

Anticonvulsants will continue accounting for maximum share among the products through the forecast period. According to Persistence Market Research, the segment held slightly more than half of the market share in 2020.

The hospital pharmacies segment is expected to contribute maximum revenue share through 2031. Currently, the segment accounts for around 32% share in the market.

Utilization of recommended therapy in clinics and hospitals overseeing a prescribed drug conveyance by a doctor is one of the major factors driving sales at hospital pharmacies.

Companies operating in the market are aiming at strategic collaborations and acquisitions with other manufacturers to expand their product manufacturing and address the demand of an expanding patient pool.

Manufacturers are also focusing on the expansion of their product portfolios by launching new technologically advanced products and by receiving approval from different government bodies.

Global non-melanoma skin cancer treatment market is anticipated to be valued at revenue of more than US$ 705 Mn at the end of the forecast period from 2017-2025.

The global compression socks market is expected to expand at a considerable growth over the next ten years at a CAGR of around 5%, and observe an increase in the value from US$ 630 Mn in 2021 to over US$ 1 Bn by the end of 2031..

Global pneumatic compression sleeve segment is projected to be the most attractive segment with a market value of more than US$ 200 Mn in 2017 and set for valuation of US$ 670 Mn by 2025 end.

Global report starts with an executive summary that states the market overview with pertinent market numbers and forecasts along with the CAGR during 2017-2025.