Antifreeze agents, also referred to as coolants, are added to water in several industries, such as automotive, oil and gas and others, to lower the freezing point and raise the boiling point of the mixture, subsequently preventing the system from freezing or overheating. In addition to this, antifreeze agents also protect a system from rust and other corrosion.

They are also used in the oil and gas industry where natural gas pipelines are installed under sea, where the temperature is extremely low. Antifreeze agents prevent blockages across the pipelines, which might be caused due to freezing, and also protect against corrosion due to salt water. An ideal antifreeze agent has a high thermal capacity, low viscosity and is chemically inert and doesn’t react with any other material inside the engine or pipeline.

Expected Scenario in the Forecast Period

The long term outlook for antifreeze agents is projected to remain positive, owing to the rising demand from the automotive industry and increasing vehicle parc, mainly in cold countries. These agents protect a vehicle’s engine from freezing or overheating and also prevent corrosion and scale formation.

The boom in the oil and gas industry in North America, owing to the production of shale gas, is projected to boost the demand for antifreeze agents over the forecast period.

There has been an increase in the use of antifreeze agents for other non-conventional applications such as heat transfer agents and coolants in geothermal pumps and air conditioning systems. They are also used as de-icing agents for aircraft.

With the emergence of electric vehicles, growth of antifreeze agents is expected to witness a decline, mainly for the automotive sector over the latter half of the forecast period.

In terms of regional perspective, Asia Pacific is projected to dominate the global antifreeze agents market. This can be attributed to the rising vehicle production and vehicle parc in countries, such as China and India. North America is projected to create significant demand from the oil and gas industry, pipelines, etc. 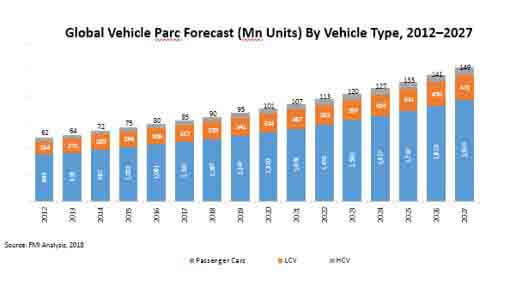 Some of the key players identified across the value chain of global antifreeze agents market are:

As a part of business strategy, leading manufacturers are entering into long-term partnerships with automotive OEMs for the long term supply of antifreeze agents.

PMR will follow a modelling-based approach and triangulation methodology to estimate data covered in this report. A detailed market understanding and assessment of the product type and end uses of the product segments covered in the study is followed by a demand-side analysis to estimate the sales of target product segments, which is then cross-referenced with a supply-side assessment of value generated over a pre-defined period.

The statistics and data are collected at a regional level and consolidated and synthesized at a global level to estimate the overall market sizes.