Moreover, isoparaffin solvents are also applied in various application areas, such as water treatment, chemical synthesis, electronics appliances, wax cleaners, printing inks, etc. These solvents have better solvency, high flash point and boiling point and high flammability. They are costlier than paraffin components and this may prove to be a challenge to their adoption among consumers.

Customizing Product Portfolio as per Application

Key vendors in the market are opting to offer isoparaffin solvents that are tailored to cater to specific end-use requirements. The market participants prefer to offer high value-added solvents to gain share in the market.

Product specifications and wide application areas will drive the growth of the global isoparaffin solvents market in the coming years. 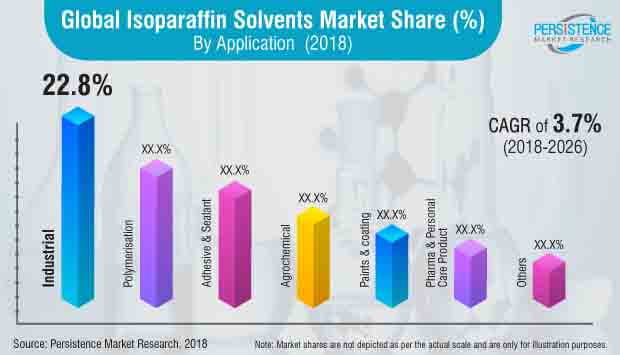 The number of consolidation and expansion activities in the market has risen over the past few years. This can primarily be attributed to the efforts being made by companies to meet the rising demand for synthetic solvents and gain access to the high-growth markets of Asia Pacific as well as strengthen their foothold in China, India and ASEAN countries

Generally, isoparaffin solvents are utilized in industrial applications for cleaning, metalworking and degreasing. Rapidly increasing industrialization in emerging markets of China, India and ASEAN countries across the SEAP region will create high demand for isoparaffin solvents over the forecast period. Moreover, high growth in end-use industries, such as automotive, adhesive & sealant, agrochemical, polymer and other industries, will also push the growth of the global market.

The initial phase of the research involved the formulation of preliminary hypothesis, which was followed by the data collection stage that comprised of both primary and secondary approaches. The subsequent stages involved triangulation of data gathered from the two approaches. Initially, the basic data collected from various sources, such as annual reports_bk_01_01_2020 of manufactures, end-users, distributors, government directives, public data sources, among others, was evaluated. Historical data in terms of solvent production and consumption from 2013 -2017 was considered as basic data for further analysis. Next, both supply side and demand side drivers and trends were studied to forecast the isoparaffin solvents market.

The next section of the global market for isoparaffin solvents assesses market dynamics such as drivers, restraints, trends and opportunities. The market has been witnessing moderate to high growth, owing to the diversified applications and availability of a number of product specifications. By application, the industrial segment is expected to register significant growth in the coming few years, due to the growth of industrialization across developed and developing regions. Moreover, the adhesives and sealants market has been witnessing healthy growth over the past few decades and is expected to continue doing so in the coming years. This growth is projected to drive the growth of the global isoparaffin solvents market during the forecast period.

The demand from paint, coating and ink applications has been rising with growth in infrastructure activities worldwide. These activities include the constructions of buildings, malls, universities, etc. Construction activities generate demand for odorless paint stripper and fast drying paints with better solvency, among other specifications. Isoparaffin solvents possess said properties and are, thus, witnessing strong demand from paint and coating applications.

The global market for isoparaffin solvents has been segmented on the basis of product type, application, and region.

The global market for isoparaffin solvents has been segmented on the basis of product type as:

The global market for isoparaffin solvents has been segmented on the basis of application as:

The global market for isoparaffin solvents has been segmented on the basis of region as:

The last section of the report includes a competitive dashboard, key developments, SWOT analysis, and financial analysis, which include market share analysis and provide information and analysis of major players based on the categories of manufacturers and service providers across the value chain and their presence in the global market for isoparaffin solvents.

The initial phase of the research involved the formulation of a preliminary hypothesis, which was followed by the data collection stage that comprised of both, primary and secondary approaches. The subsequent stages involved triangulation of data gathered from the two approaches. The basic data of isoparaffin solvents was collected from various sources such as annual reports_bk_01_01_2020 of manufactures, end-users, distributors, government directives and public data sources, among other sources. Both, supply side and demand side drivers and trends were considered to forecast the isoparaffin solvents market.

In the next stage of analysis, the collected data was distributed on the basis of different verticals. This base year information was further segmented across categories as mentioned in market taxonomy and analyzed the overall market size of isoparaffin solvents. Then, that data was validated where the market assessment was deduced from the hypothesis model.

The isoparaffin solvents market report also analyses the incremental $ opportunity and global absolute dollar opportunity. Volumes derived pertaining to isoparaffin solvents were refined on the basis of responses obtained from industry participants. The responses obtained were weighted in order to refine the data and validate assumptions associated with the assessment of the market size. Moreover, numerous factors were taken into consideration while forecasting the price of isoparaffin solvents. In pricing analysis, the weighted average price of the commercially-available grade was calculated & a forecast was derived through our proprietary forecast model.